Alien Covenant is not Alien 5. Well ok it kind of is but it isn’t, are you confused yet? So some clarity on this. Alien 5 is a film sequel that District 9 director Neill Blomkamp is hoping to make at some future date but it may never happen.

The currently untitled Alien 5 is best described as a sequel to director James Cameronâ€™s 1986 definitive science fictionÂ experience Aliens. On the other side of the fence, Alien Covenant is a direct followup to Prometheus. To celebrate we have some awesome Alien Covenant poster art to really scare and intrigue you with.

The second Alien film of course ‘Aliens’ from Jim Cameron saw Ripley (Sigourney Weaver and her band of action hungry space marines ( including the late Bill Paxton ) return to LV-426 and the isolated colony of Hadley’s Hope.

LV-426 or Acheron has an equatorial diameter of 12,201 km and maintains a surface gravity equivalent to 0.86 of that on Earth and rotational period of about 2 hours. Generally it is not a fair weather planetoid. Hence the purpose of the colony there was to terraform the world, cool huh!

Hadley’s Hope was a human terraforming, research and mining colony that was established on LV-426 ( Archeron ) in 2157. The settlement was co-financed by the Extrasolar Colonization Administration and the Weyland-Yutani Corporation. By 2179 Hadley’s Hope maintained a constant population of 158 colonists. It was subject to a major Xenomorph infestation that ultimately all but destroyed the complex. See more about the Hadley’s Hope colony on LV-426. 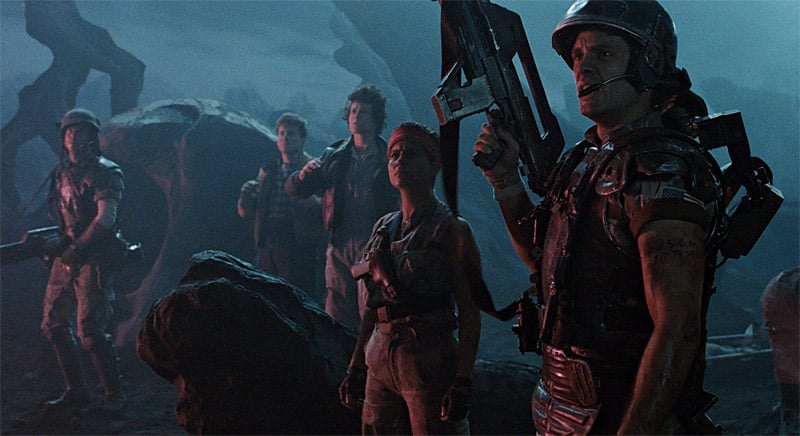 Outside Hadley’s Hope : Â They mostly come at night mostly, and you definitely don’t want to be there.

Ripley and the marines returned to LV-426 withÂ the goal of finding out exactly what had happened to a group colonists of Hadley’s Hope. ( Hint, we can kinda guess what might have happened. ) For the full story watch just the film as it is a total blast if you haven’t seen it yet.

Suffice to say that ‘Aliens’ is seen as the definitive Sci-Fi action movie by so many people, even after 30 long years. The artwork from Aliens in particular has inspired digital artists everywhere. Be it the Warthog from Halo or the ship designs of Avatar. As artwork and futuristic vehicle design in particular goes Aliens isÂ a pretty inspirational movie to all graphic artists and digital effects firms that do this kind of bespoke design work.

Alien 5 is intended to be a sequel to the events that took place at the colony of Hadley’s Hope. Supposedly enabling the return of the deceased Corporal Hicks and others such as Newt. Alien 5 possibly intended to ignore the ensuing events of the less well received Alien 3 and subsequent films.

At least this was one of the more popular rumors back in 2015 and the film was in development prior to Alien Covenant gathering pace. However having two Alien themed films potentially releasing at the same time would be rather unusual. So it was very likely that something had to give. Of course sometimes cinematic novelties do occur. In 1983 there were two James Bond Films. One starring Roger Moore ( Octopussy ) and the other starring Sean Connery ( Never Say Never Again. )

However Neill BlomkampÂ the Alien 5 director broke the bad news himself on Twitter back at the end of October 2015, saying that heâ€™s going to be moving on to something else for the time being.

Alien is kinda holding/ pending prometheus 2. So I shall be working on other things… as much as I love the xeno- and Lt ripley

To get a grasp of what this feature is about and to appreciate why Alien lore has inspired so many designers and artists check out all the video material that we have assembled. Videos ranging from trailers to deleted scenes featuring Hadley’s Hope. Then move on and enjoy the Alien poster art.

So what is Alien Covenant exactly? Well all of the information currently available indicates that it is a sequel to 2012’s Prometheus. Yet a sequel that bridges the gap between that film and the original 1979 Alien. The general plot of Alien Covenant is as so.

Bound for a remote planet on the far side of the galaxy, the crew of the colony ship Covenant, which includes Walter, an android similar to David who was the sole survivor of the doomed Prometheus expedition, find what they believe to be an uncharted paradise. It soon reveals itself to be a dangerous world inhabited by the original David and monstrous creatures that start to hunt them down.

What Was The Space Jockey?

Actually the first intriguingÂ scene that connected Prometheus with the 1979 film ‘Alien’ was early in that original movie. Fleetingly as the camera pans around the interior of an abandoned alien ship we see fossilized remains. These remains could wellÂ be the long dead pilot of the crashed derelict vesselÂ discovered on LV-426. This is an entirely different species of extraterrestrial affectionately known as ‘The Space Jockey.’; The one off creature exhibited what appeared to be a curious exit wound in the chest area. 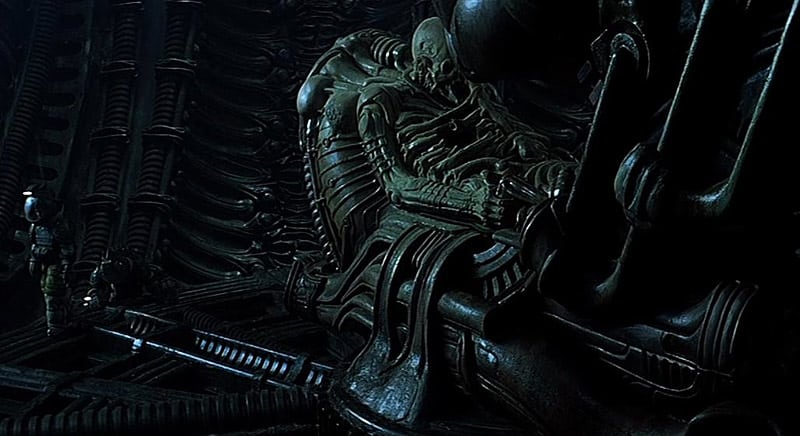 The Space Jockey scene from Alien : Film fans for years debatedÂ the true meaning of this brief scene.

Alien fans for years ponderedÂ what the true meaning of this brief scene in the film may have been. The populist suggestion being that the pilot was compromised by an alien worm and crashed his ship. Or that the pilot set the ship down rapidly on LV-426 while setting an urgent panic transponder. This transponder signal was later misinterpreted as a distress beacon by the crew of the U.S. commercial starship Nostromo returning to Earth in the 1979 ‘Alien.’

Alien Covenant would appear to have some plot similarities to Alien. In that once again the off world explorers encounter a stranded Alien craft. They are then compromised by deadly eggs and the soon hatching ‘face huggers.’

Alien Covenant releases to general audiences in May 2017. However in the meantime an thrillingÂ series of Alien Covenant poster art has been released for you all to enjoy.

The first poster in this stunning set show a familiar face in the form of a fully grown Alien staring menacingly towards it’s audience. The Alien Covenant poster is entitled ‘Run,’ well I know I would! 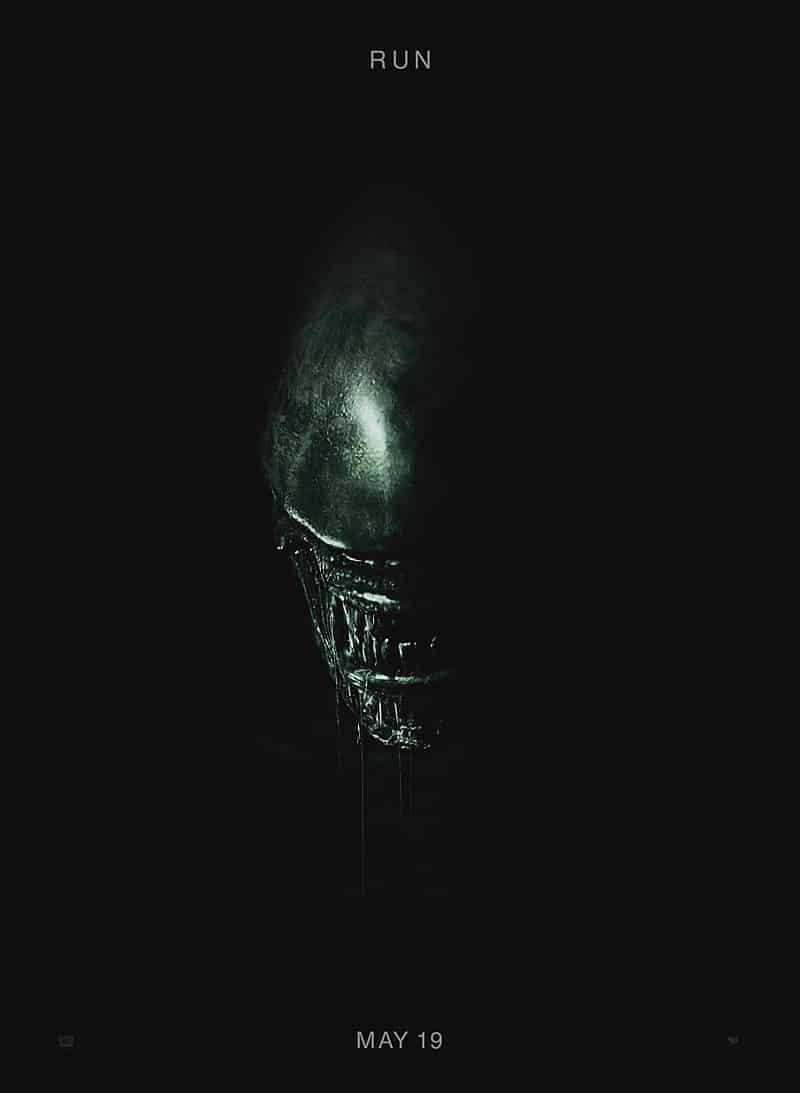 The second Alien Covenant poster in the set is a connectingÂ poster. The poster implies that once you have run and escaped from the Alien; now is the time to ‘Hide.’ Hiding from something like this is good advice soÂ I sure second that. 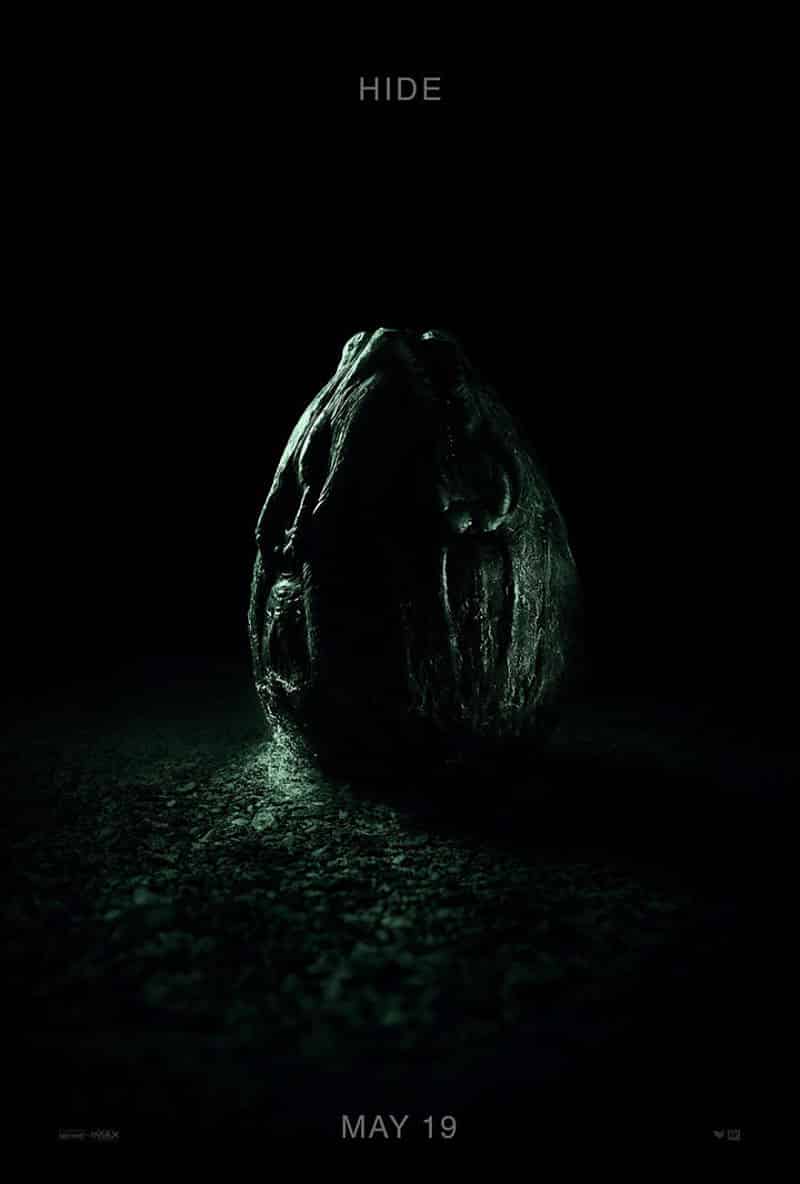 The newer â€˜Covenantâ€™ poster is quite possibly suggesting that the larger Alien Queen first seen in 1986’s ‘Aliens’ will make a fresh appearance in the new 2017 Alien film. This most recent Alien Covenant poster almost has a mythological feel to it that is reminiscent of old paintings by great masters. 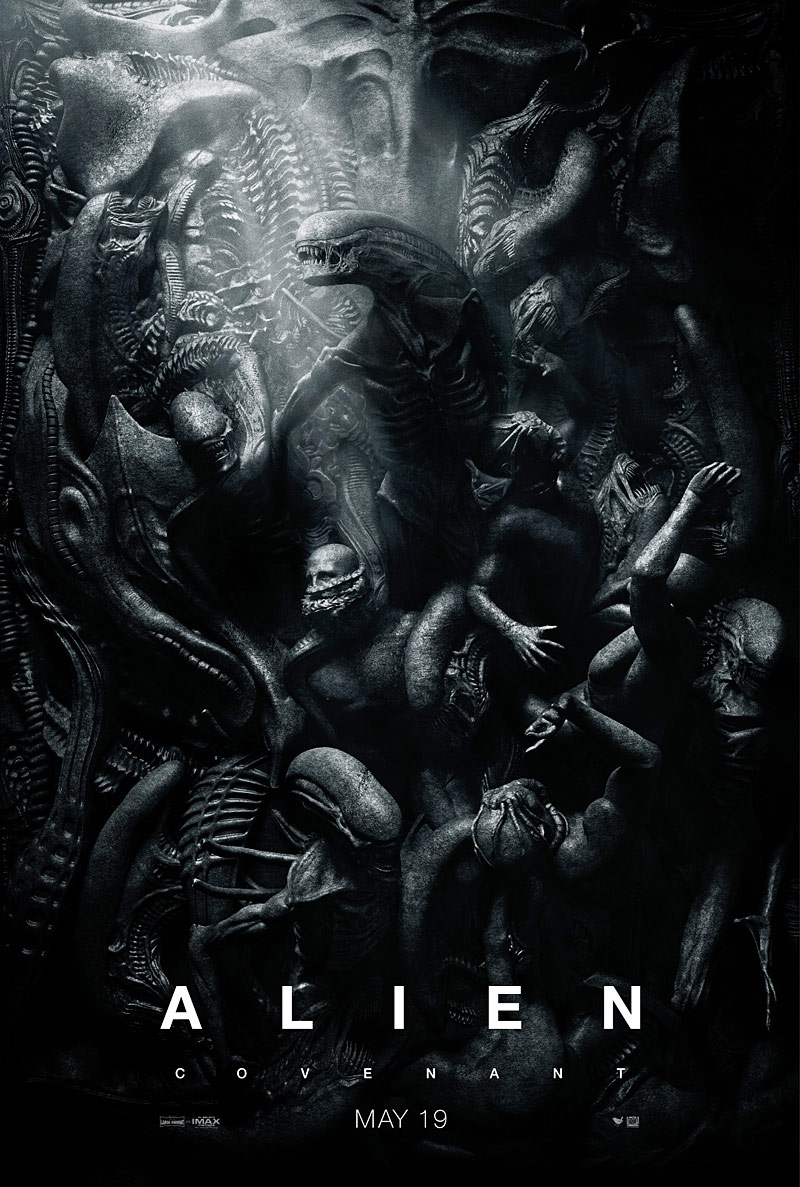 This particular piece of poster art for the United Kingdom cinema release is interesting. Not only is the poster in a different style altogether from the other Alien Covenant posters in this feature set. The poster for UK cinemas reminds us in some ways of the battle that Ripley endured against the Aliens in the second movie in particular. 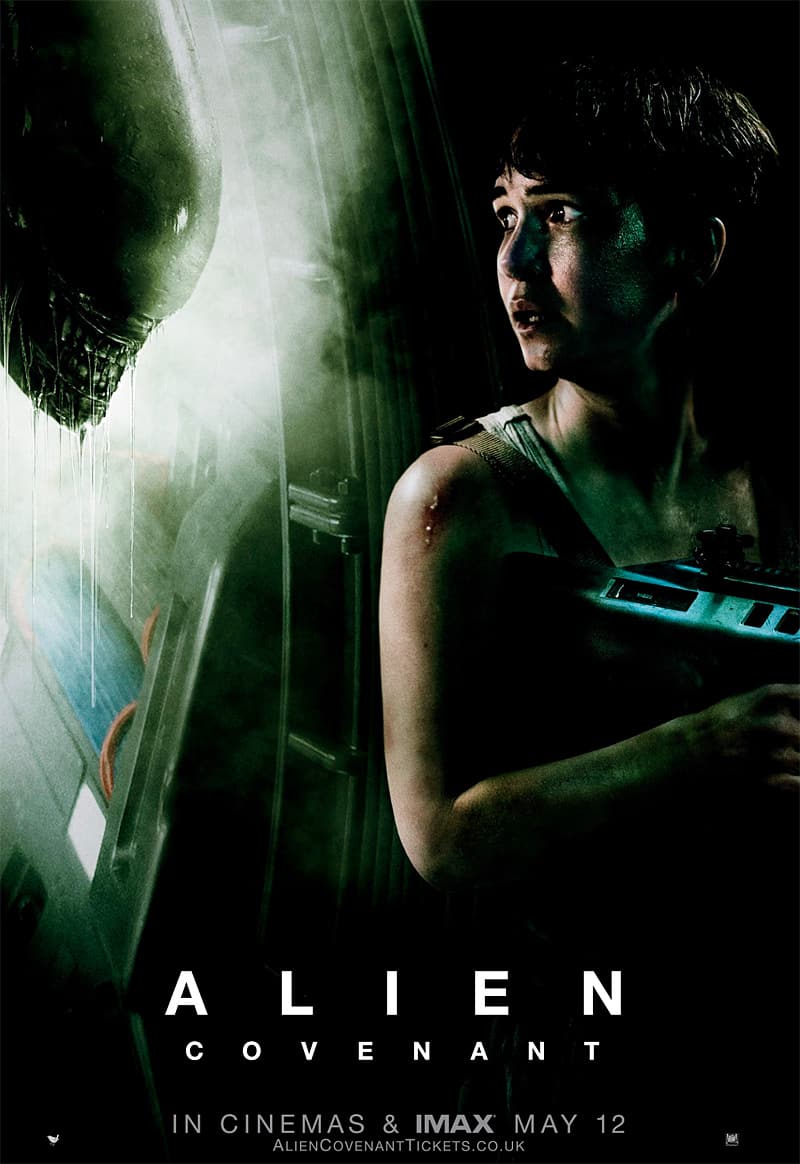 Alien Covenant UK Poster :Â Just as Ripley locked and loaded her weapons to go into battle in Aliens we find similar feeling are evoked here in this latest UK Alien Covenant poster.

About Alien Covenant and the Release Date 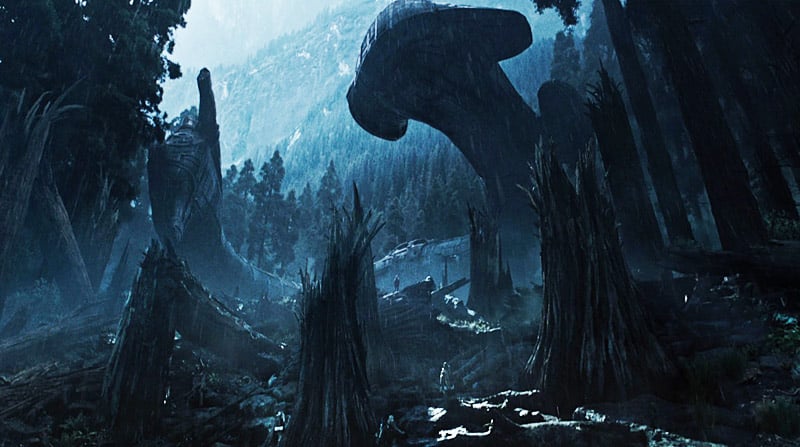 More Crashed Spaceships : This time the derelict spaceship is found on a paradise world earmarked for human colonization in the semi-near future.

These are truly awesome examples of Alien poster art, so if you like Sci-Fi posters like this then be sure to share. Or leave a comment if you are fascinated by any aspect of the Alien film franchise so far.