Cat Defies Death In A Most Extraordinary Survival Journey

20. The Cat Who Once Had A Happy Life 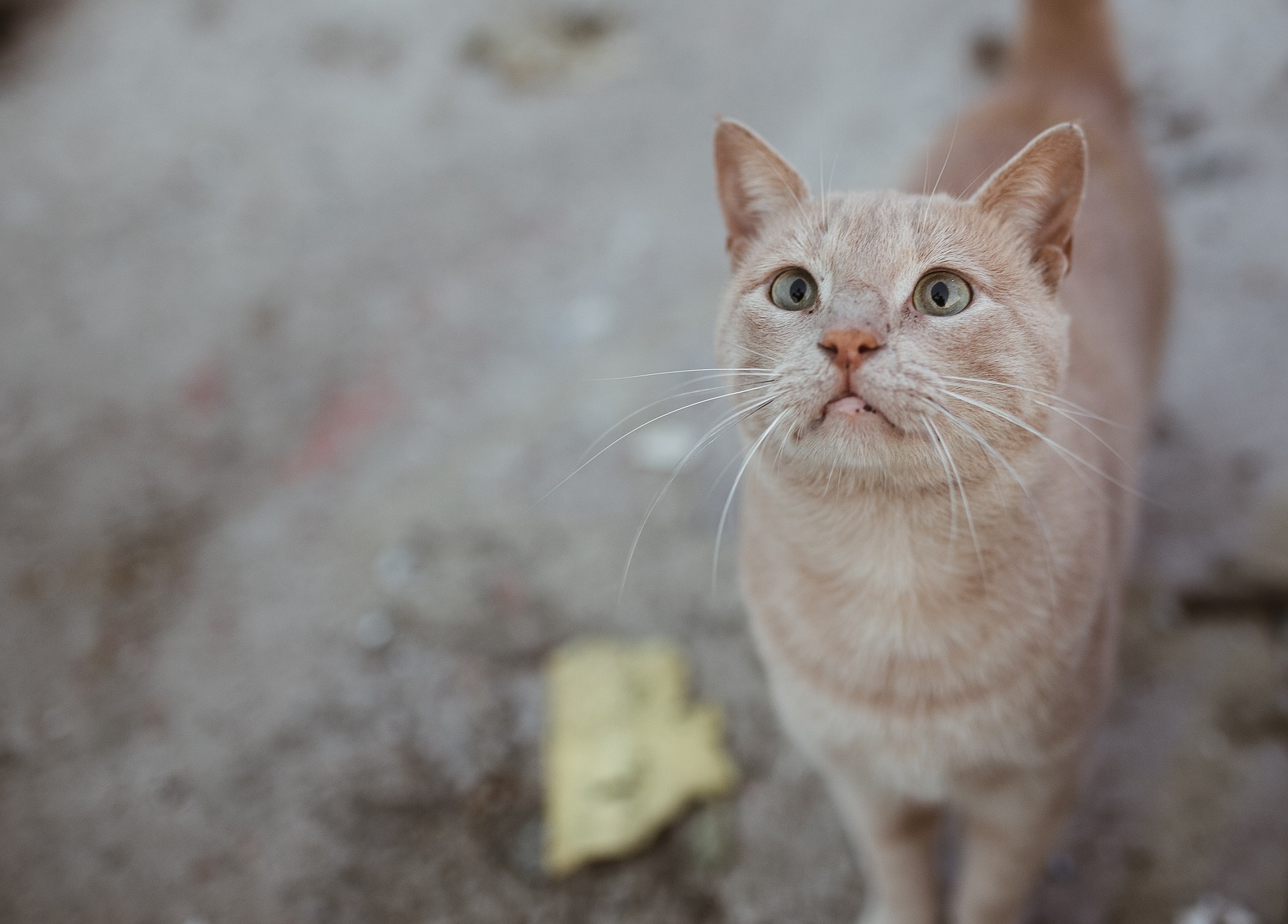 Benben used to have the time of his life roaming about on the streets of Vancouver, Canada. Barely aware of the dangers of stray life, he hopped about from one fencing to another, wandering wherever he pleased. Until one day, his carefree life came to a jerk when he was attacked by another stray animal. His wounds were deep, and he had nowhere to go.

19. Attacked By An Enemy 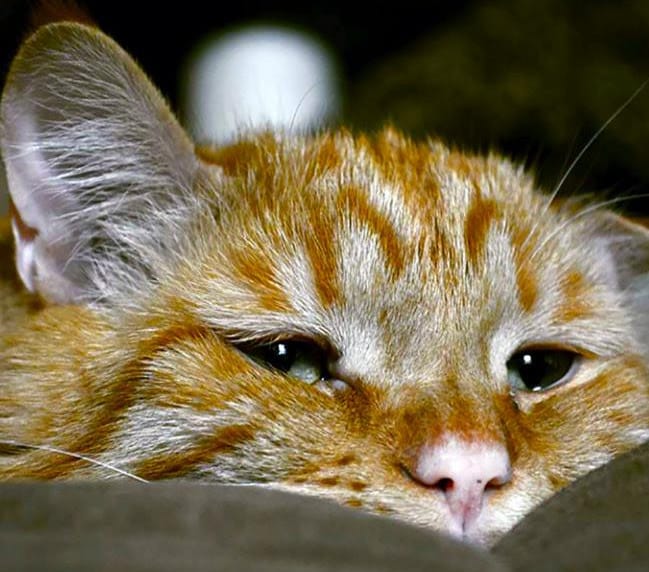 This was April in Canada; it was cold and the air was harsh. It wasn’t a great time for stray cats to get injured. Benben, oblivious to the cares of the world, had no idea that his wounds would take forever to heal in this season. Or that he would soon find himself struggling for dear life. He had suffered damage to his face which had a permanent frown. But there was something more serious. 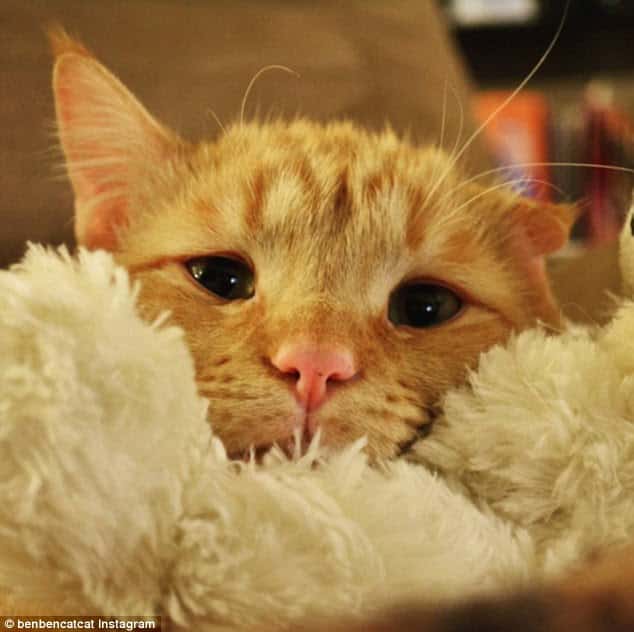 Benben had crushed his spine. He was growing weaker with each passing day. Just moving from one spot to another was painful. So he lay on a street in Vancouver for several days. Lucky for him, he was discovered by a rescue team and was taken to an animal shelter. But the moment the vet saw his wounds, he knew Benben’s days were numbered. His survival would depend on several things. 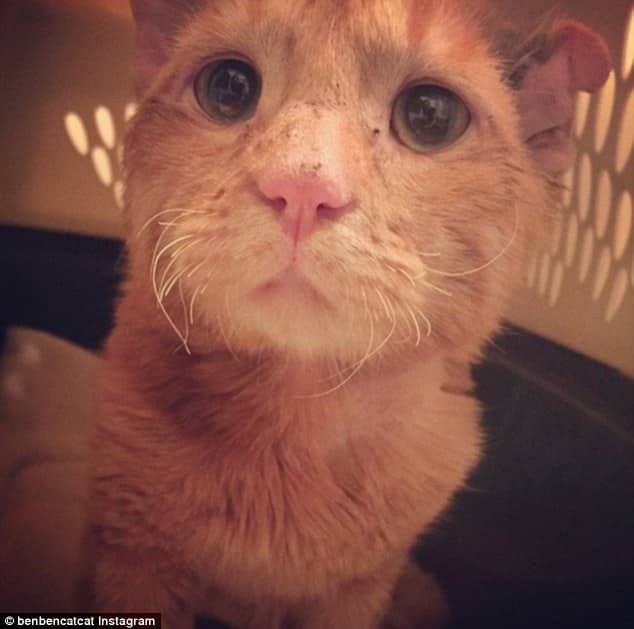 Since they had found Benben almost on the verge of dying, there was no health history available for the poor cat. The SPCA (Society for the Prevention of Cruelty to Animals) had difficulty diagnosing the source of the trauma. They did administer some TLC but Benben wasn’t responding. It was as if he had resolved that death was near. He didn’t know that he was destined for something bigger.

16. Barely Any Hope To Life

Benben had several other complications including many lacerations on his body. He was malnourished thus his immune system wasn’t exactly working in his favor. Since he also suffered from facial damage and excess skin, his face was pulled down into a sad expression. It was as if his whole demeanor was signaling towards the end of his life, at least that’s what the doctors concluded until something amazing happened. 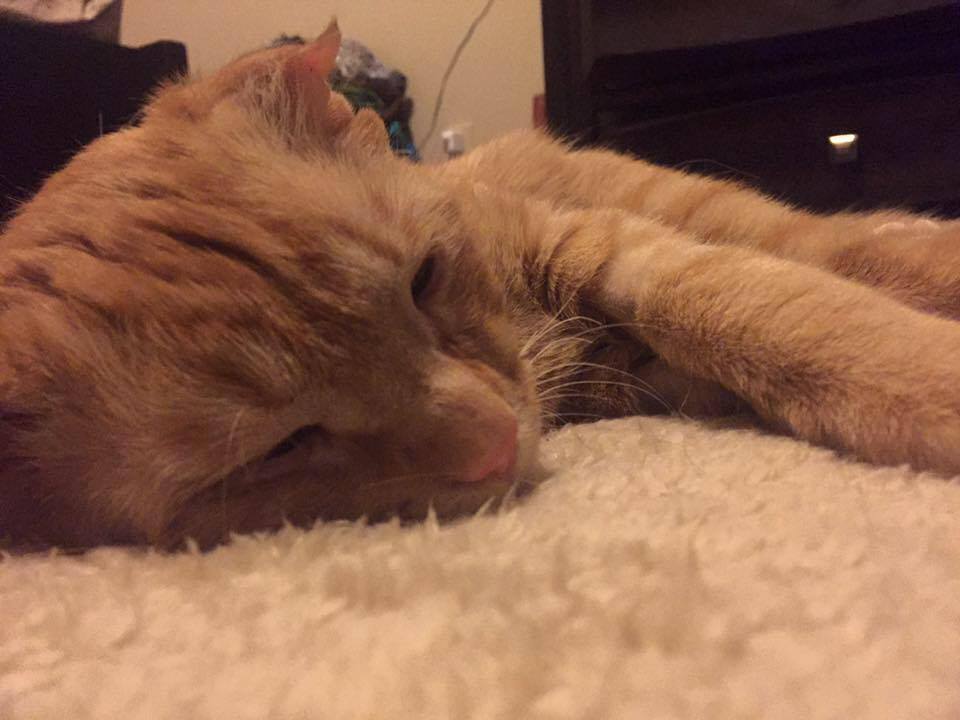 Benben’s health was spiraling downward. He had now stopped eating completely. He was refusing to drink even water and eventually lost the will to move. It looked like he had given up on life, given up on himself and the shelter staff. It was then that the staff had to take an extremely cruel decision.

14. Time To Euthanize The Cat 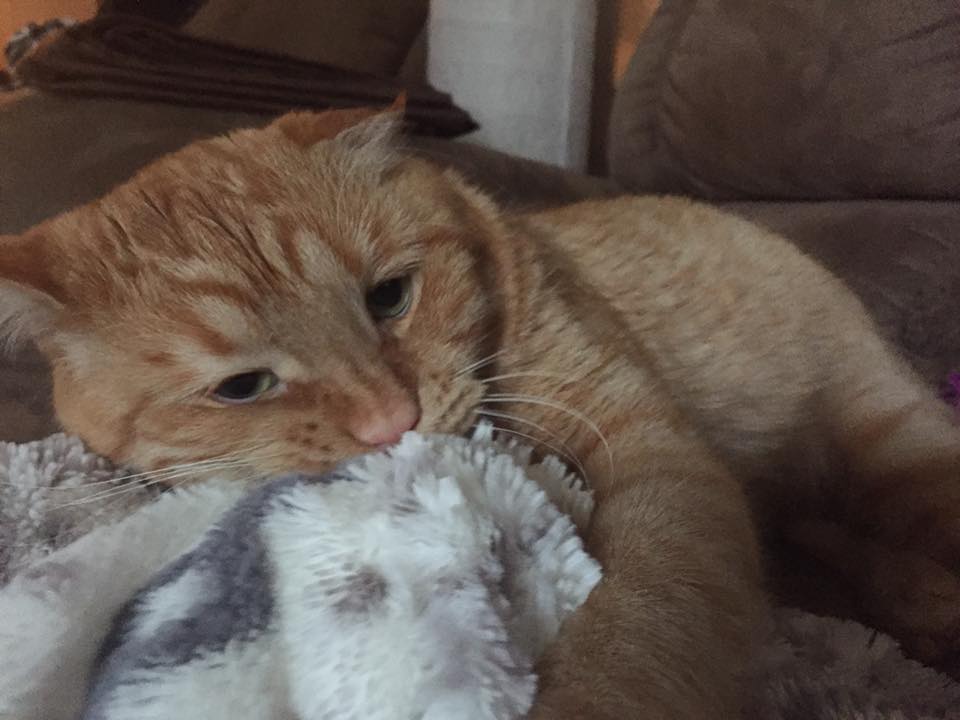 The vet at the shelter was dreading to address the obvious. The staff had worked day and night to help Benben recover. The only chance that the poor cat had at life was if he could live on pain medications, but since he had stopped eating, even that wasn’t an option anymore. Now even the day of his death was set. Would he fight his way to life? 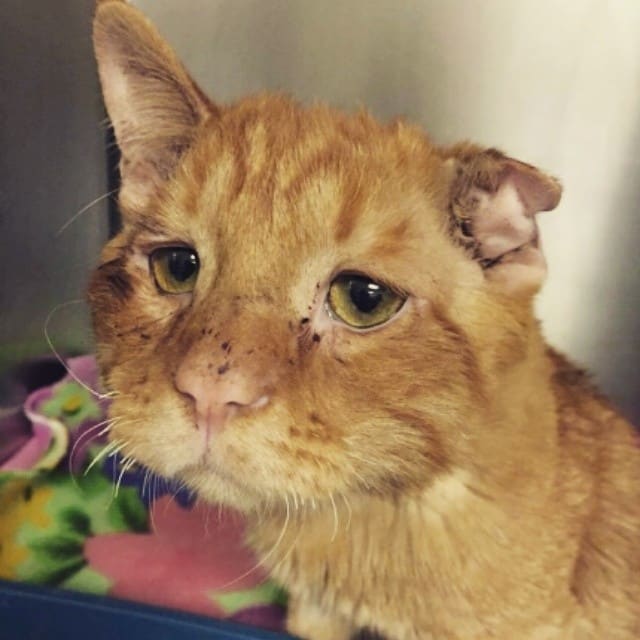 Benben used to be a happy cat and the only possible reason why he had given up on his life was that he didn’t have anyone to love. He didn’t have a companion, a family member to call his own. By the time he experienced the love and care of shelter staff, he had already gone into a state of medical stupor. 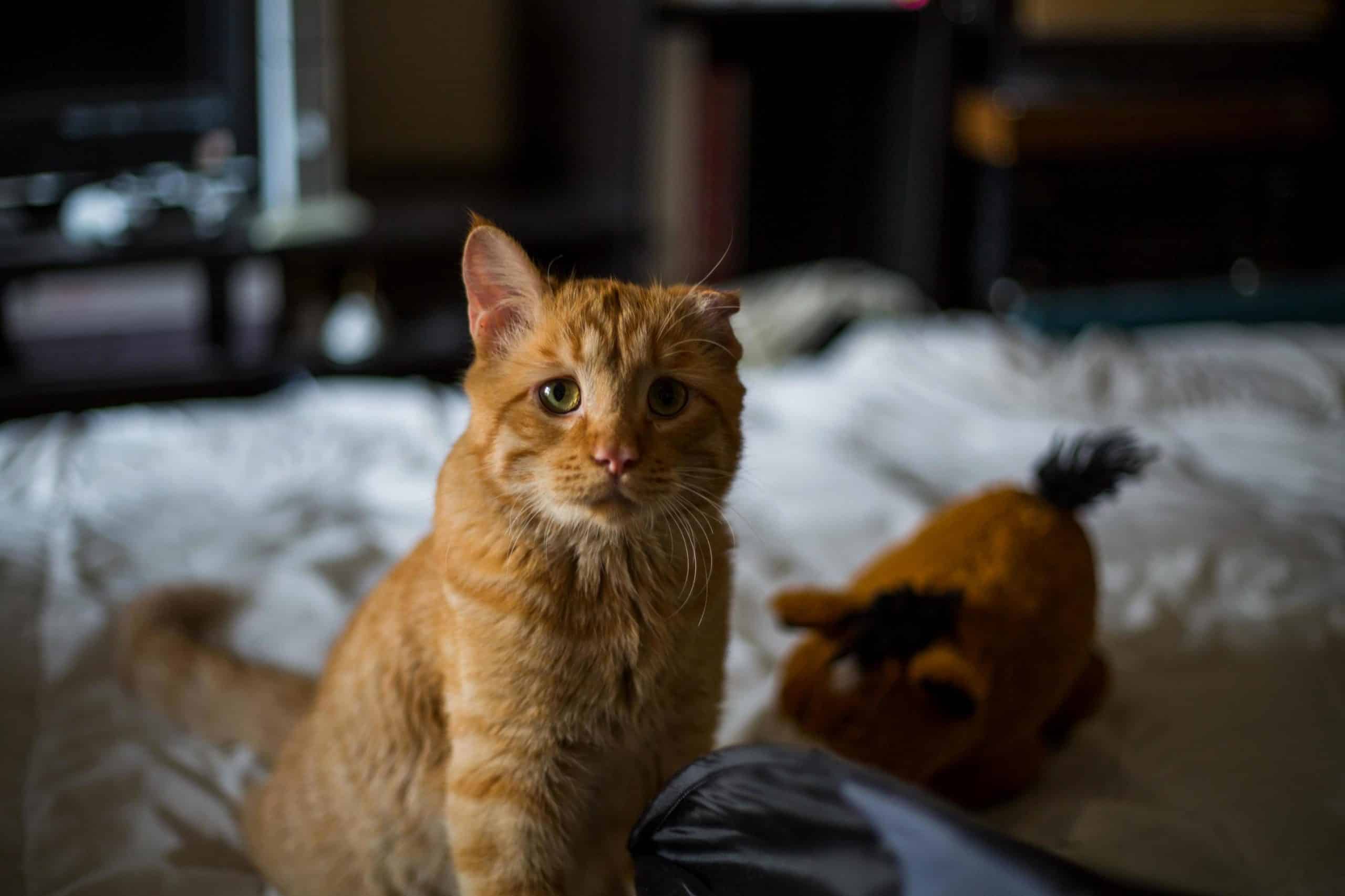 Sandy Windover and Adam Tutt first heard about Benben through a friend who just happened to mention that a poor cat was awaiting euthanization at the shelter. Sandy couldn’t help but ask the friend about Benben’s condition. At once, Sandy and Adam made the decision to adopt Benben. They would have to act faster than they thought.

11. One More Day Until Death 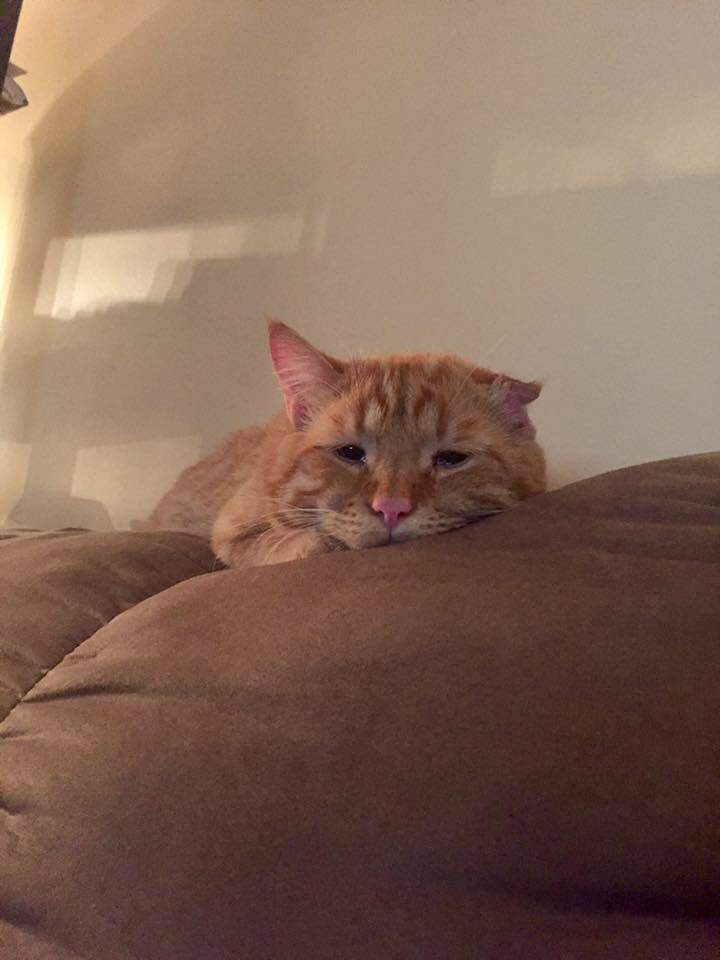 Benben’s date was approaching fast. When Sandy and Adam contacted the shelter, they were told the whole process would take days. The shelter was committed to not inflicting any more pain on the cat, so they wanted to make sure whatever they did, was the right decision for him. There was one more day left for the scheduled mercy death. 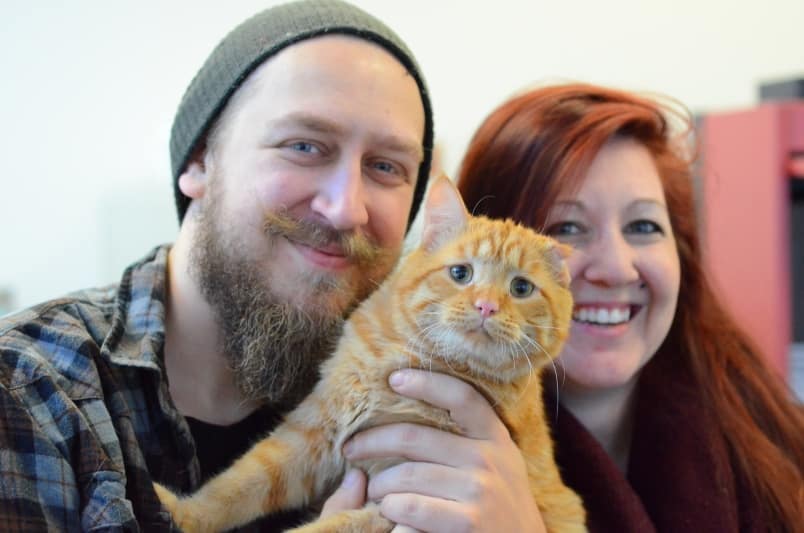 The couple did all they could to hurry up and finish the paperwork and were successful. When Benben was being led to his new home, he couldn’t even open his eyes. Such was the effect of the medication. There was one more impending challenge for his life now. There were other cats in his new home and the couple wasn’t sure how they would accept Benben. Cats, as we all know, are territorial creatures. 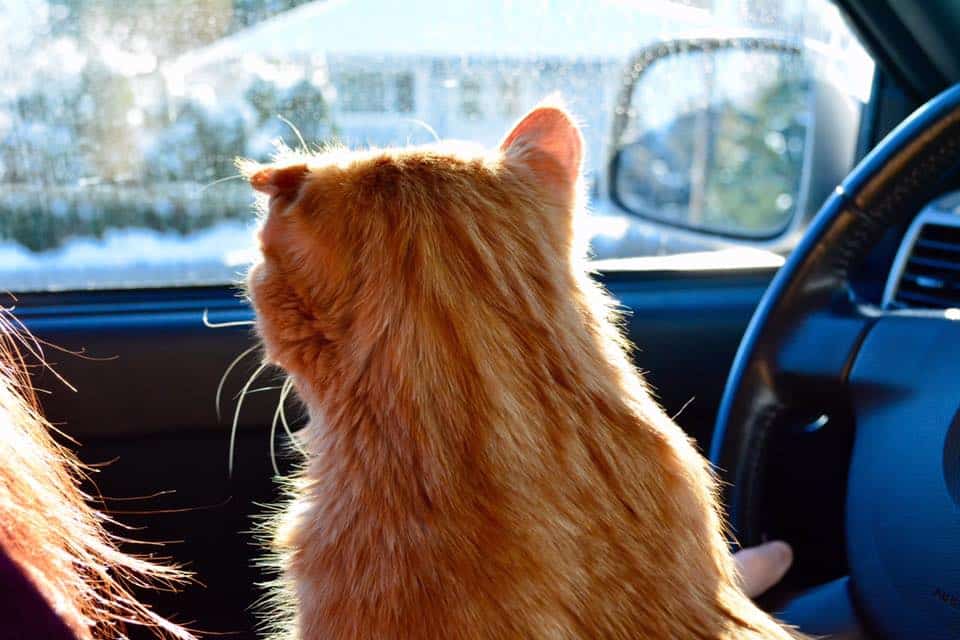 The couple decided to make a spare bathroom the home of Benben. That way, he could take his own time recovering, and they could keep him under supervision. This is when Benben experienced love for the first time in his life. The couple testified later that the cat soon became active, surveying the surroundings with his eyes and was ready to snuggle up anytime. 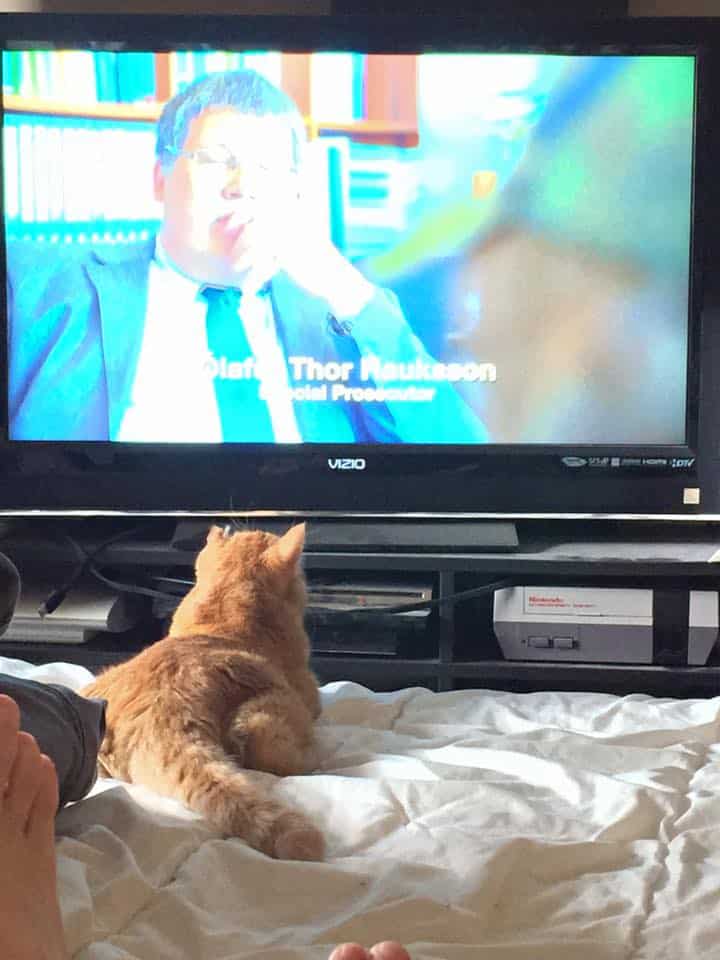 There was another reason why Benben loved to snuggle. When Sandy or Adam carried him along, he loved putting his head on their hands. He would sit in that position for hours as the couple watched TV. Sandy was fearing something else, though. 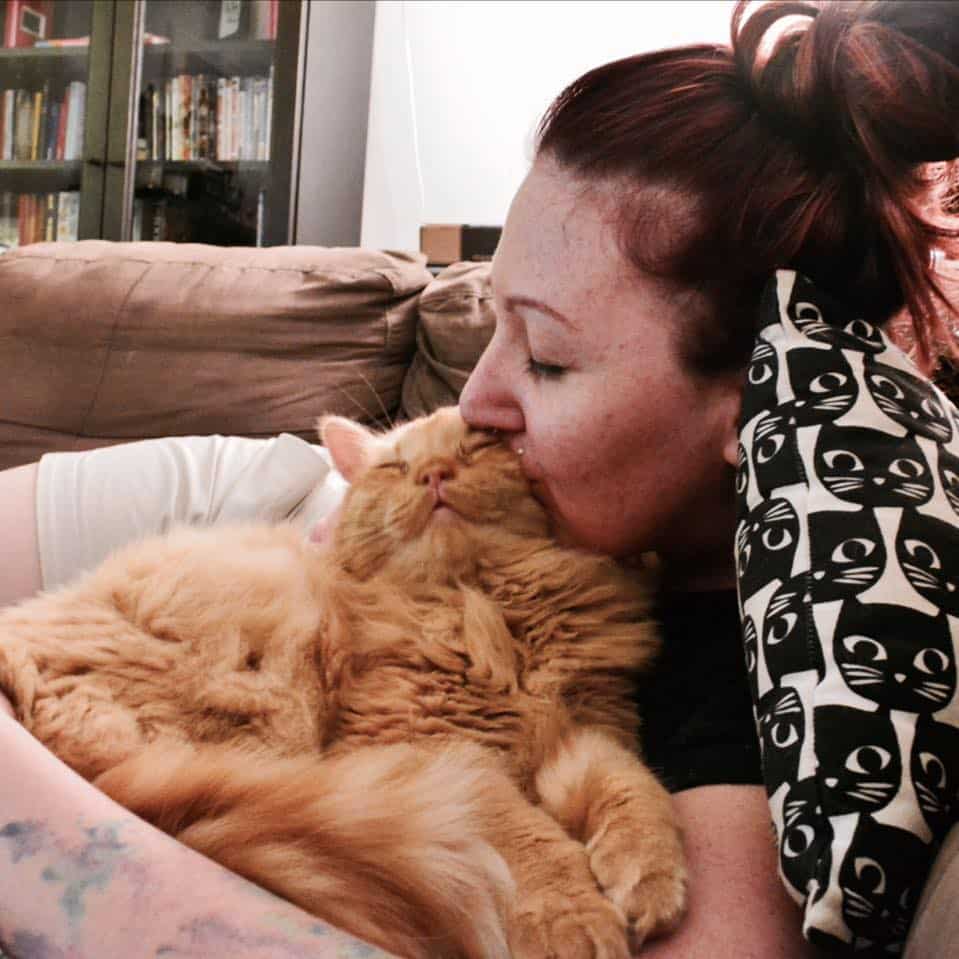 While Sandy was happy that Benben was responding to their affection, she feared if the cat would ever move again. She didn’t want Benben to feel content with his current movements and knew he had to try harder. And that he did. The doctors earlier had little hope that he would ever walk again but Benben found a way to walk in his own style, moving awkwardly but steadily. Adam’s cozy bedroom slippers became his new spot for sleeping. Was it love which was leading to the cat’s recovery?

6. One Hurdle In Walking 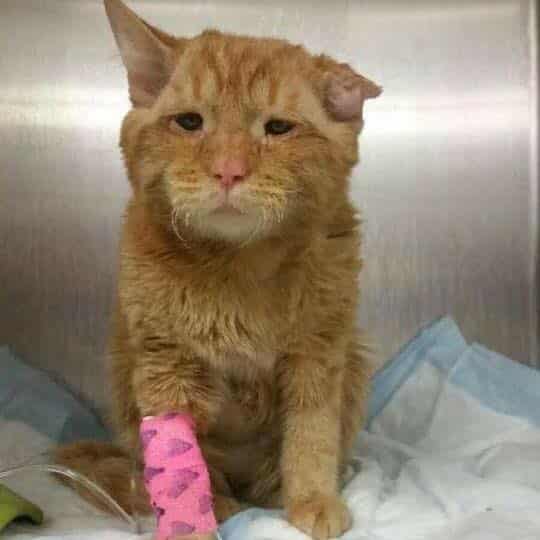 It turned out, Benben loved being around people and fellow cats. He had seen crowds and other cats but was never inside a cozy home. He was experiencing the warmth of love for the first time and how the little family lived together. He was learning to recognize the smell of the owners. Sandy said he had soon developed an appetite and would now beg for food.

The cost of caring for Benben started to get expensive.

5. Who Would Fund His Recovery? 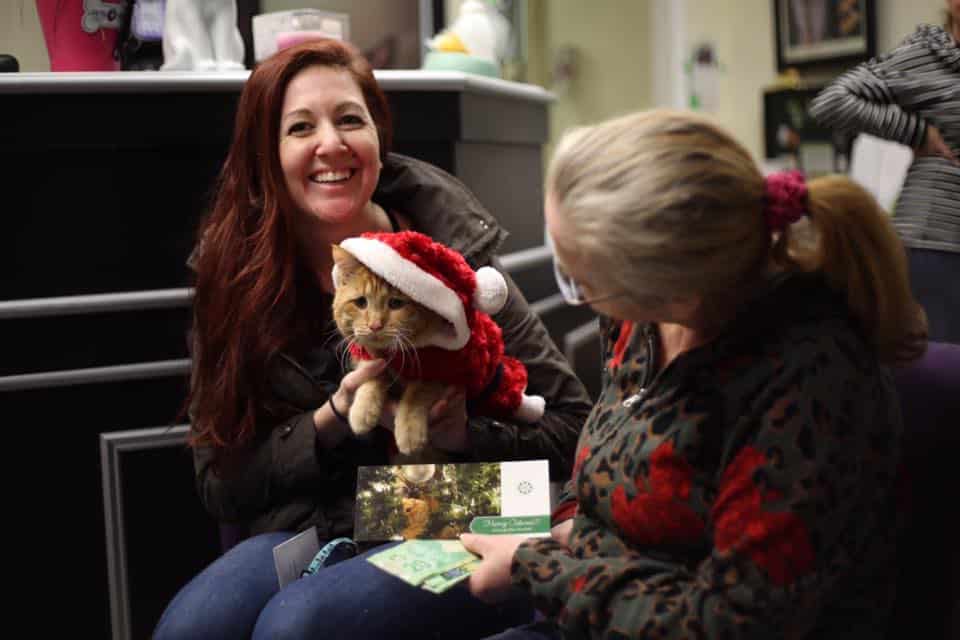 The couple was quite animal-savvy since they liked to rescue cats., but they had their own jobs and expenses. The cost of keeping Benben was beginning to escalate every day. Every day they feared he would hurt any of his wounded body parts in his struggle to walk. Who would sponsor his further treatment? 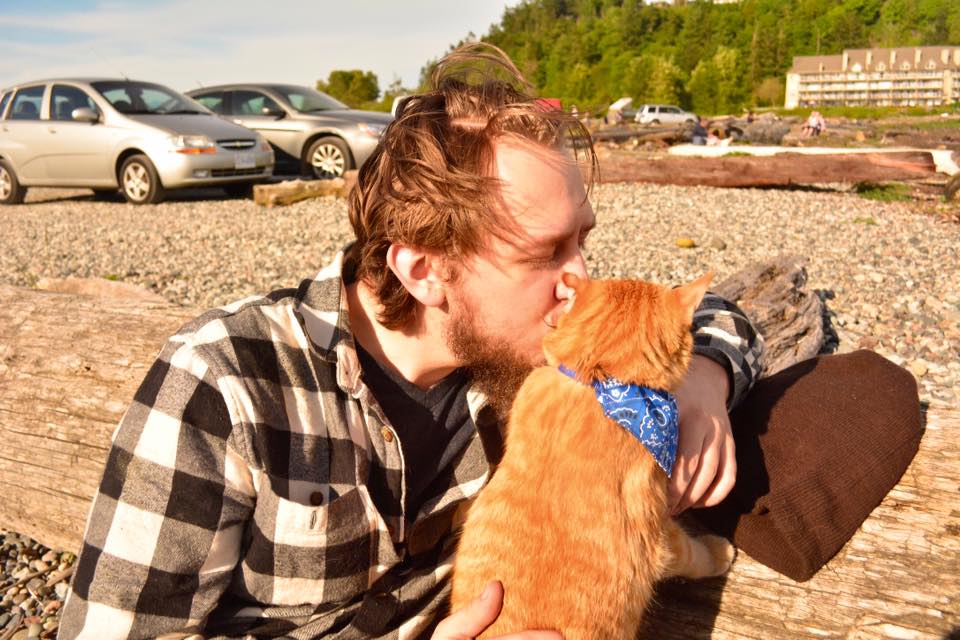 Benben had by now developed what looked like a ‘bunny hop’ while climbing the stairs. His owners said that the lack of movement in his knees and elbows had forced him to improvise how to get around. They learned that the cat had a strong will and someone to look up to. He was determined to get better, and by now his adventures had become famous on Instagram. Would Benben’s Instagram fans want to fund his recovery?

3. Would Benben Ever Walk Again? 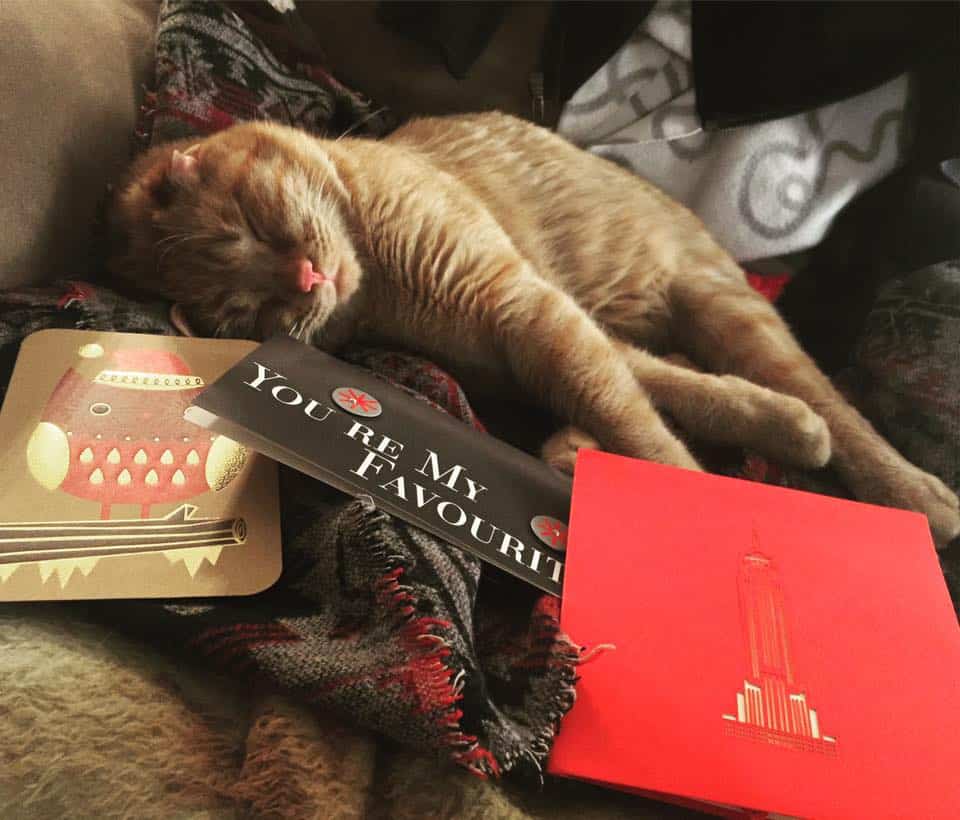 The couple started a GoFundMe page for Benben in order to raise more funds for his treatment. Sandy and Adam didn’t expect that Benben’s spirit to live had inspired so many hearts. They were able to raise enough to help their darling cat. Would he now learn to walk normally?

2. He Starts To Heal 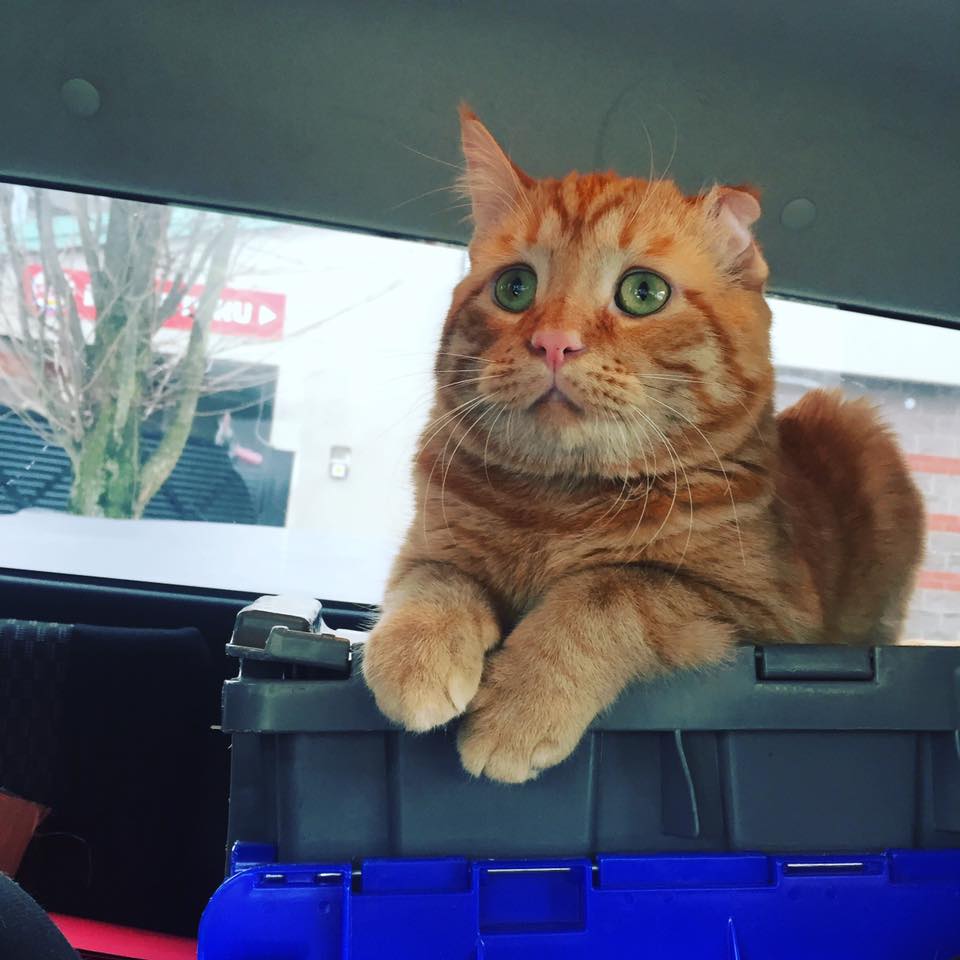 It took several months of treatment, oodles of love and lots of will for Benben to be able to walk again. He had quickly become a favorite among the other cats in his new home. The couple had enough money to take him to his routine treatments so his face and legs could heal. And sure enough, they did.

1. A Whole New Lease At Life Benben’s life now revolves around eating, running after other cats, taking strolls in the garden, snuggling with his owners and occasionally getting to ride in the car. His face is changing too, he is starting to look happier. He has won everyone over even at the vet’s clinic. The staff members always look forward to having him. He is an obedient patient but occasionally throws tantrums. 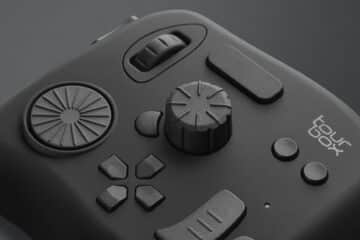