If there’s something we all know about dogs and cats, then it must be that they are born rivals! However, a tiger named Suria and her German shepherd friends don’t seem to care about that stereotype. Suria is a huge Siberian tiger who acts just like a dog and you are going to be amazed to find out Suria’s story! 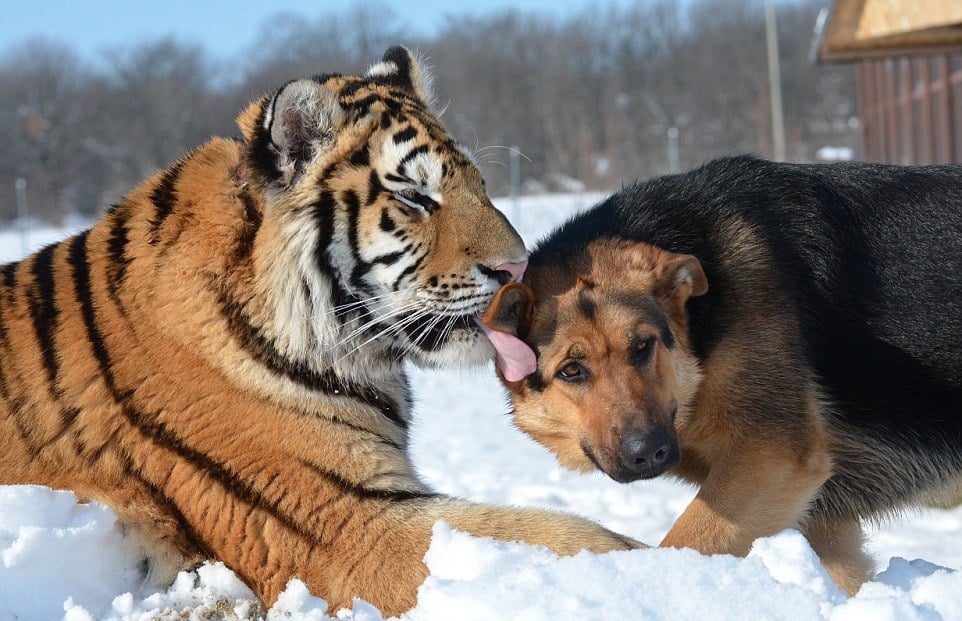 As incredible as this might be, Suria the Siberian tiger is best friends with Jenny, the German shepherd. The next picture is even more amazing! 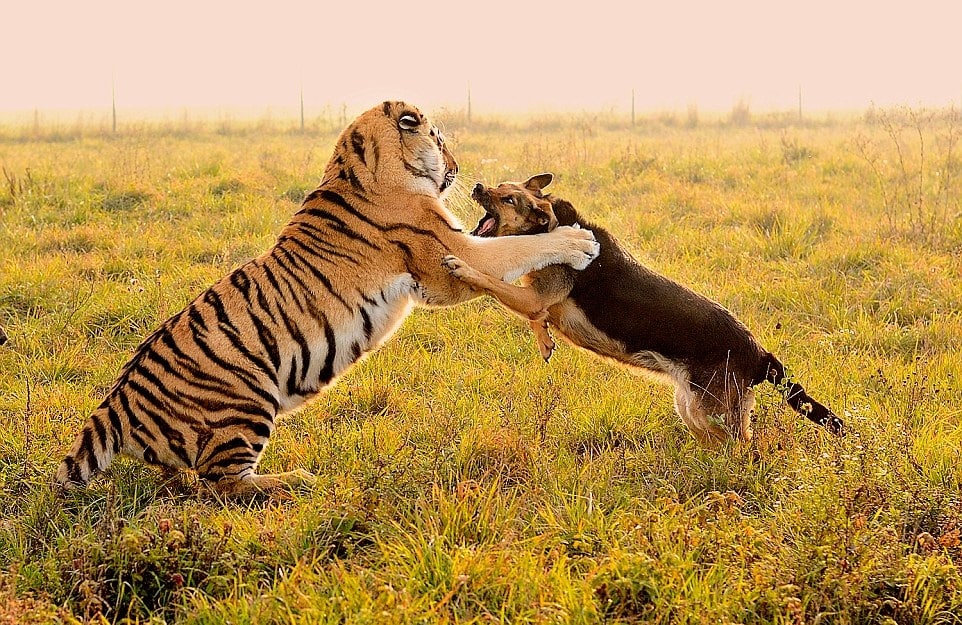 While this picture might make it seem like Suria and Jenny are going at each other’s throats, this is not the case. The two animals are just playing around. Don’t believe me? Well, then make sure you keep reading and see what’s coming next! 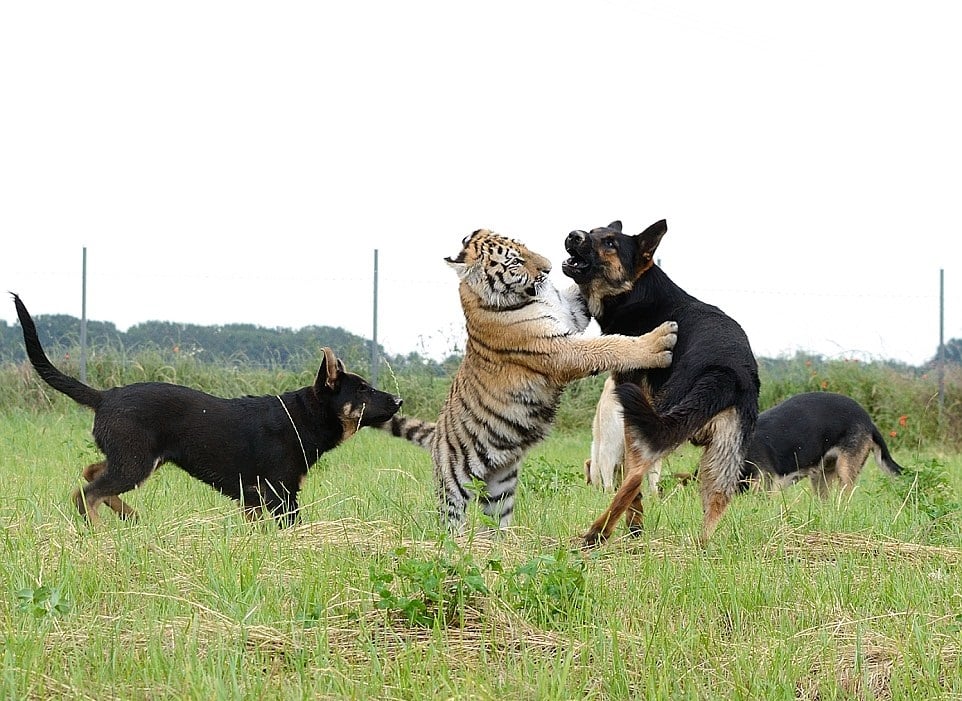 As you can clearly see, the huge Siberian tiger is actually just playing around with her dog friends. Suria grew up with Jenny and the bond between them is something special. 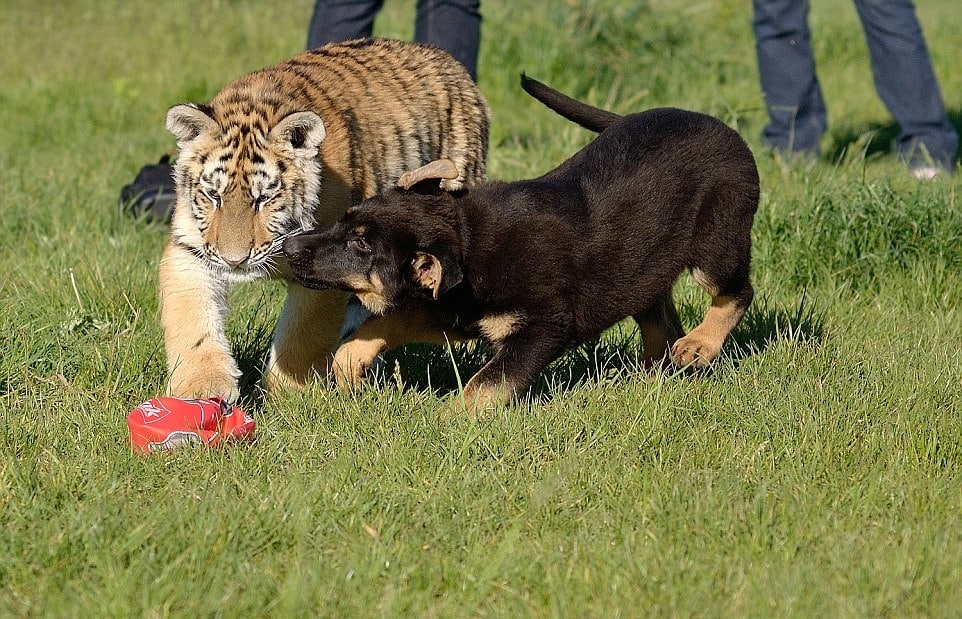 These incredible pictures have been snapped by Lucia Zustakova who visited the Oasis center in Slovakia where Suria and Jenny were born. The next picture will show you how cute Suria was when she was just a cub. 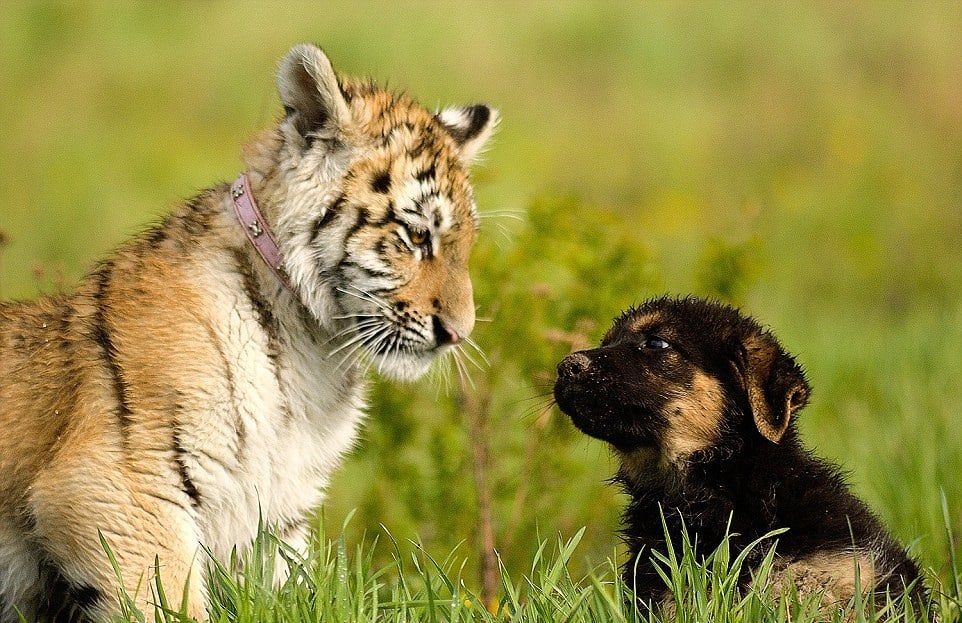 This picture was taken when Suria and Jenny were growing up. Aren’t they the most adorable animal best friends ever? Nonetheless, Suria is now all grown up and she has her own cub! 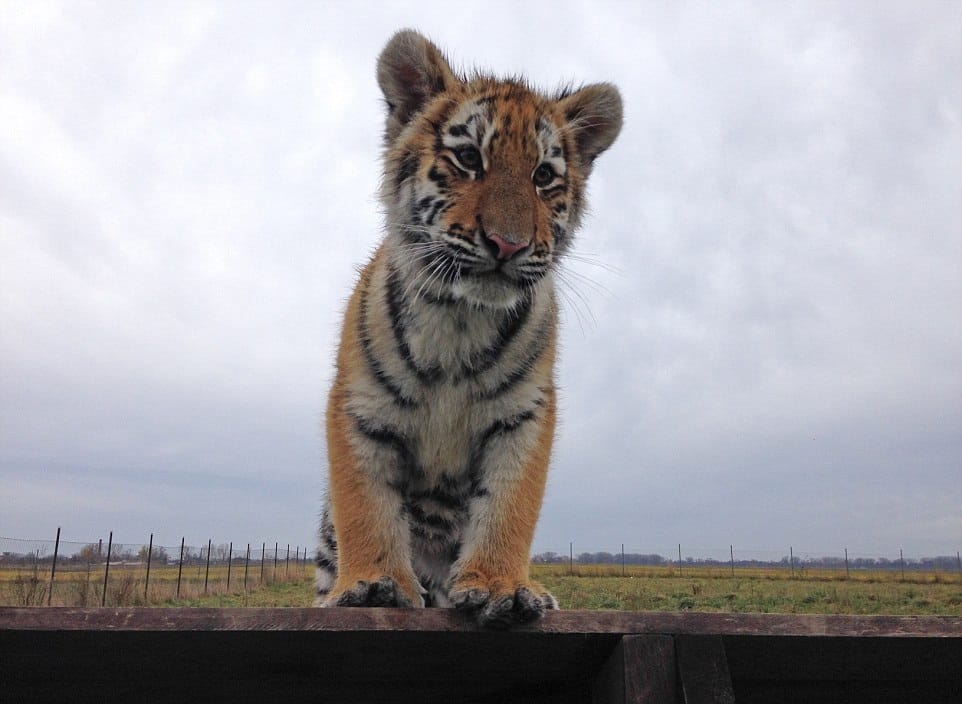 This adorable baby tiger is called Sunny and she is Suria’s cub. Just like Suria, Sunny is being raised at the Oasis center and the cub loves playing around with the German shepherds. 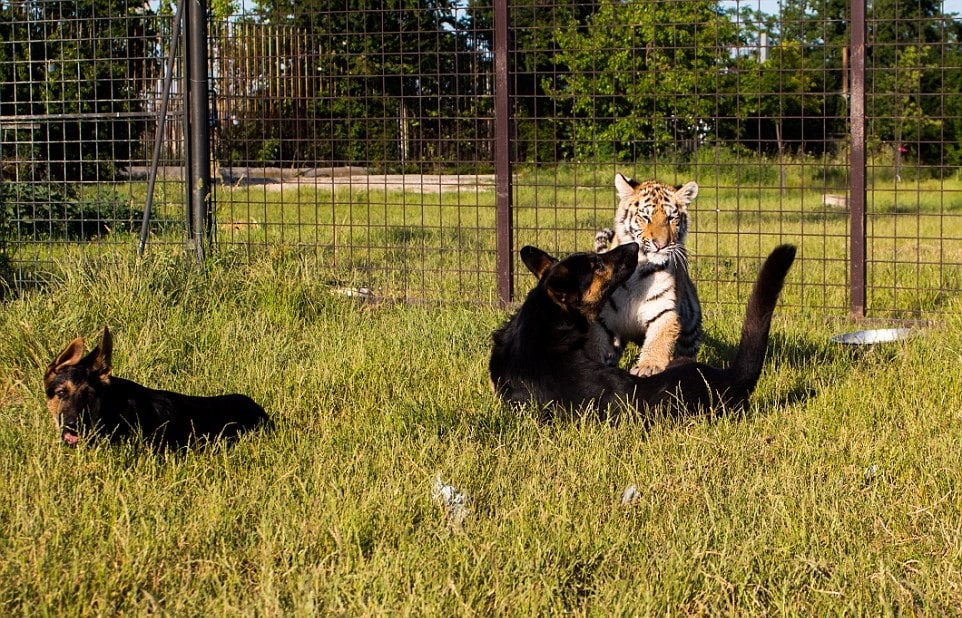 The people who work at the Oasis center are saying that they always get lots of visitors who want to see Suria play with Jenny. Who wouldn’t want to see this show of a lifetime?

Can you imagine how amazing it must be to see a huge Siberian tiger playing in the grass with a small German Shepherd? This is an incredible experience that you only see once in a lifetime. 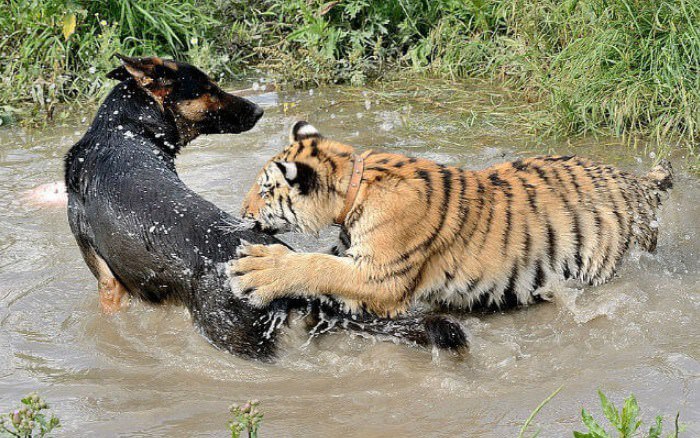 One of the most incredible times to see Suria and Jenny together is when they take baths. New visitors always get scared when this happens because they expect Suria to attack, but they couldn’t be more wrong. 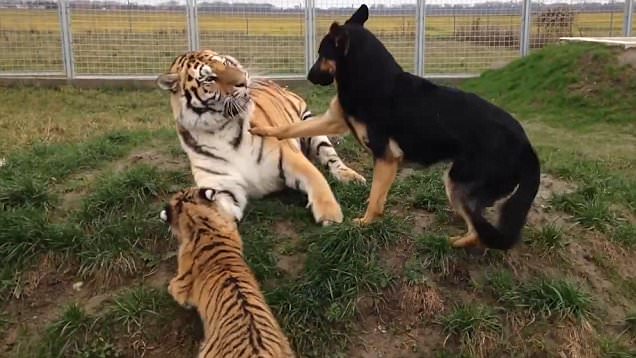 Suria is best friends with Jenny and this helps her be comfortable around other dogs. Their friendship is rare and the pictures we are about to show you will reveal just how amazing it must be to visit the Oasis center. 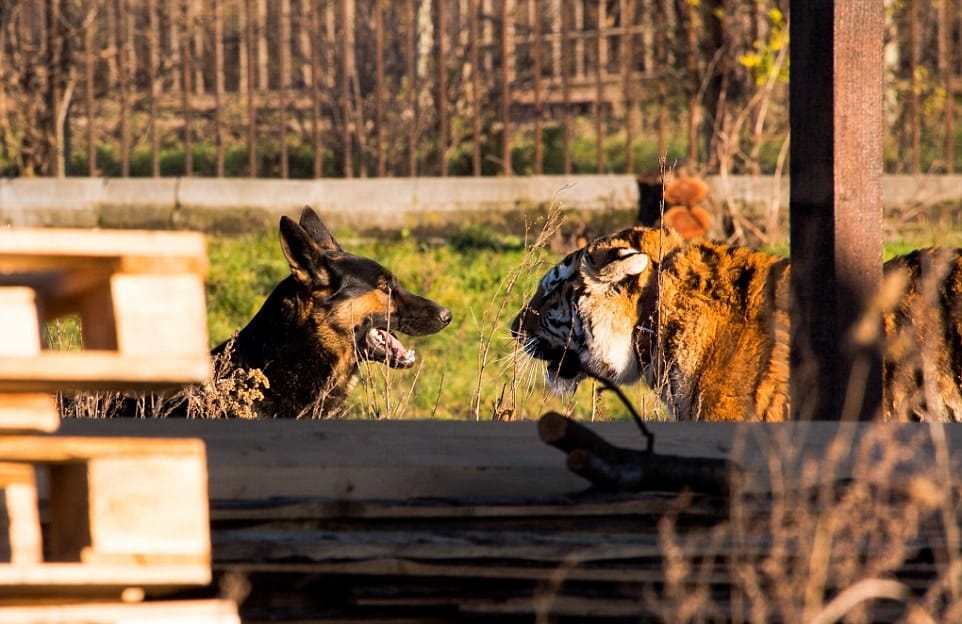 The main goal of the people who volunteer and work at the Oasis center is to help tigers. The volunteers save tigers from all over the world and then take them into their care. You will not believe how many tigers the center managed to save until now! 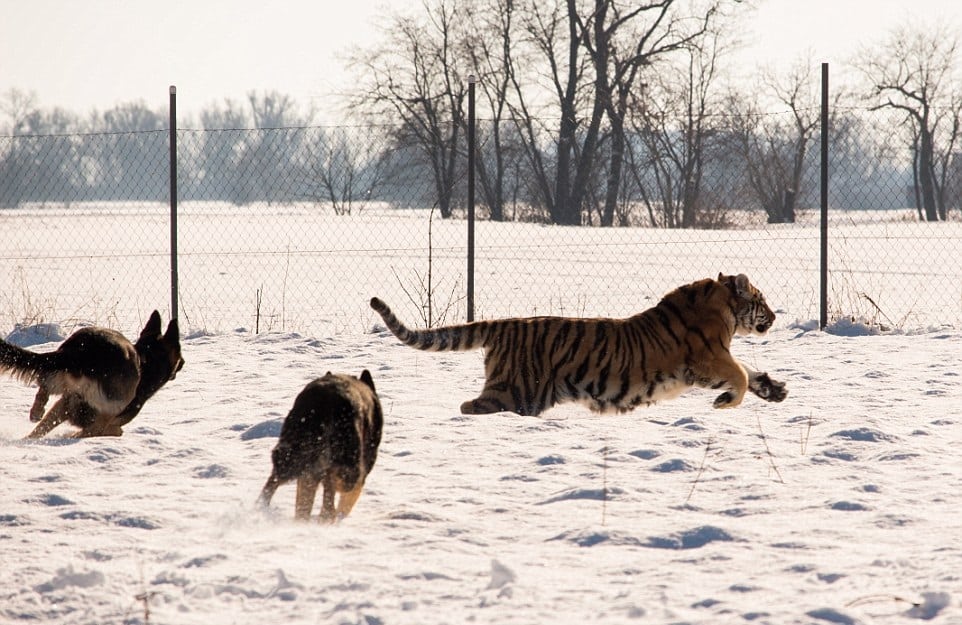 The folks who volunteer at the Oasis center have helped 28 tigers until now! To make things even cooler, 23 of those tigers were born at the center and they grew up alongside dogs. 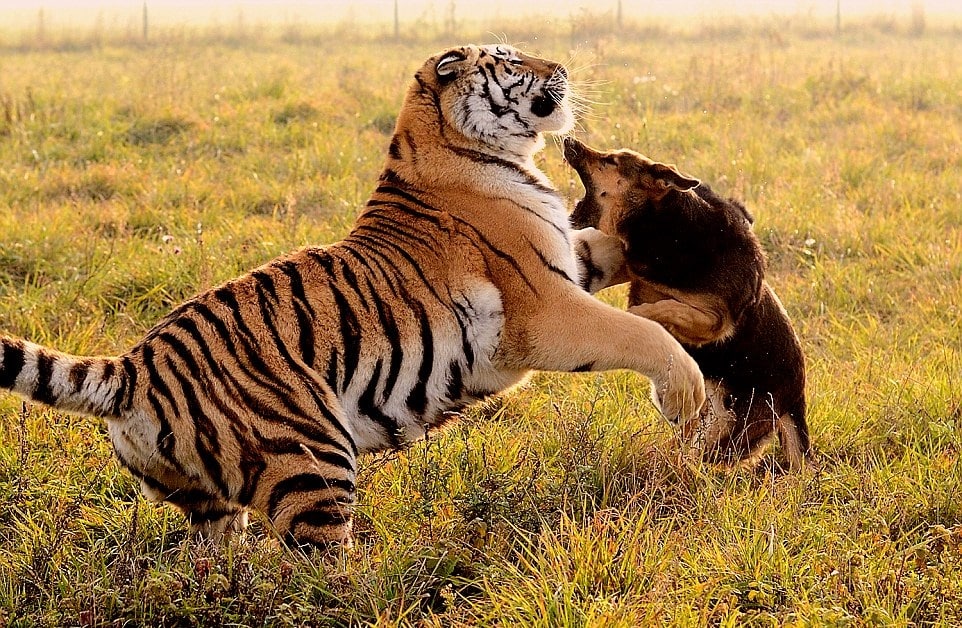 Siberian tigers are an endangered species and this is why there are so many people who come and visit the Oasis center in order to see Suria. You don’t get that many chances to see a huge Siberian tiger playing around with a dog! 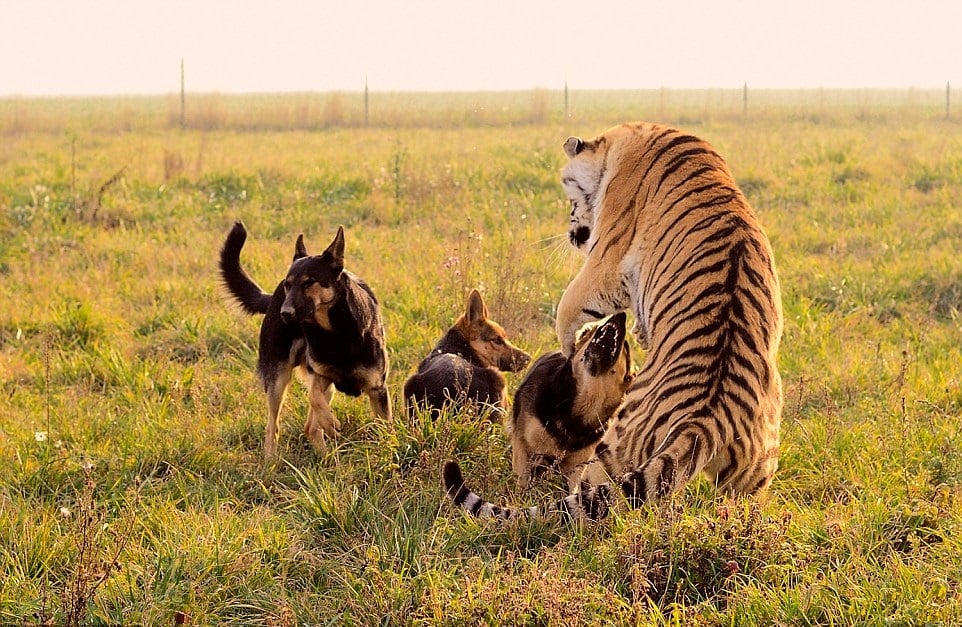 From the looks of it, Suria and Jenny’s favorite thing to do is to play fight all day long. I bet that these two friends love to see what reactions they get from people whenever they jump around. 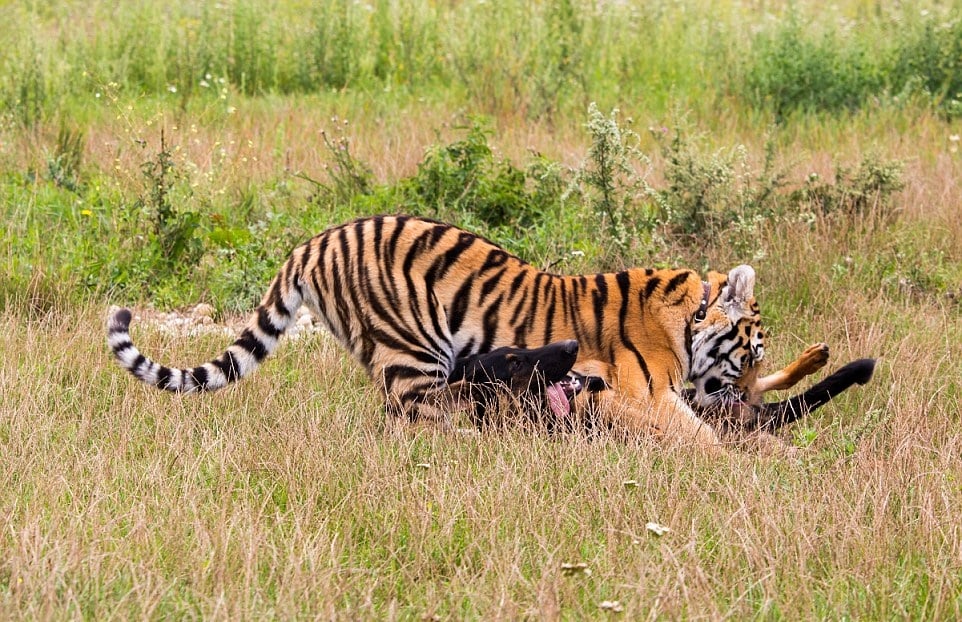 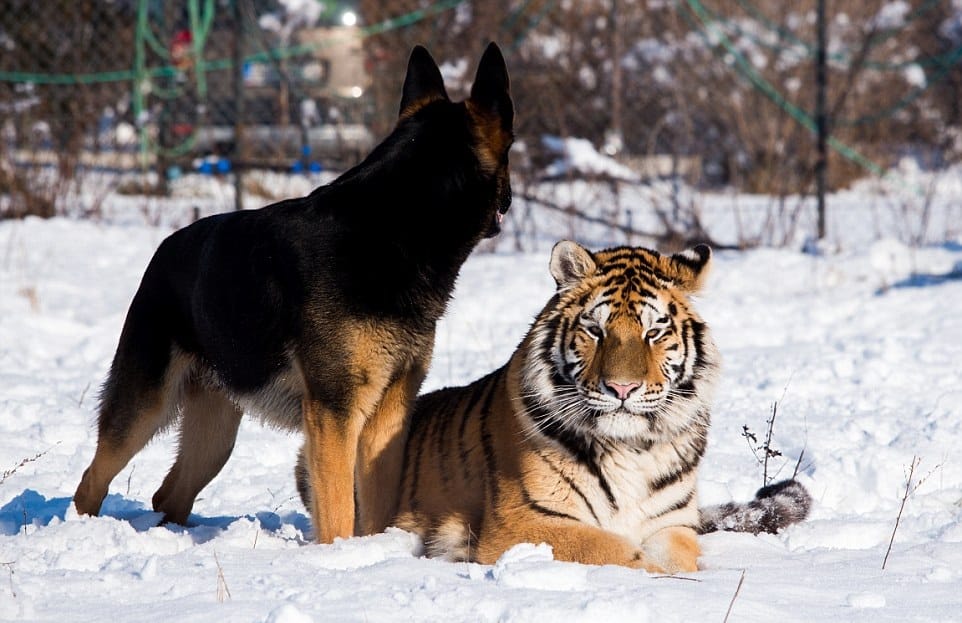 Even though Suria and Jenny are mostly known for being an odd pair of friends, no one can deny that they are beautiful animals. Can you imagine how cool it must be to see a Siberian tiger this close? 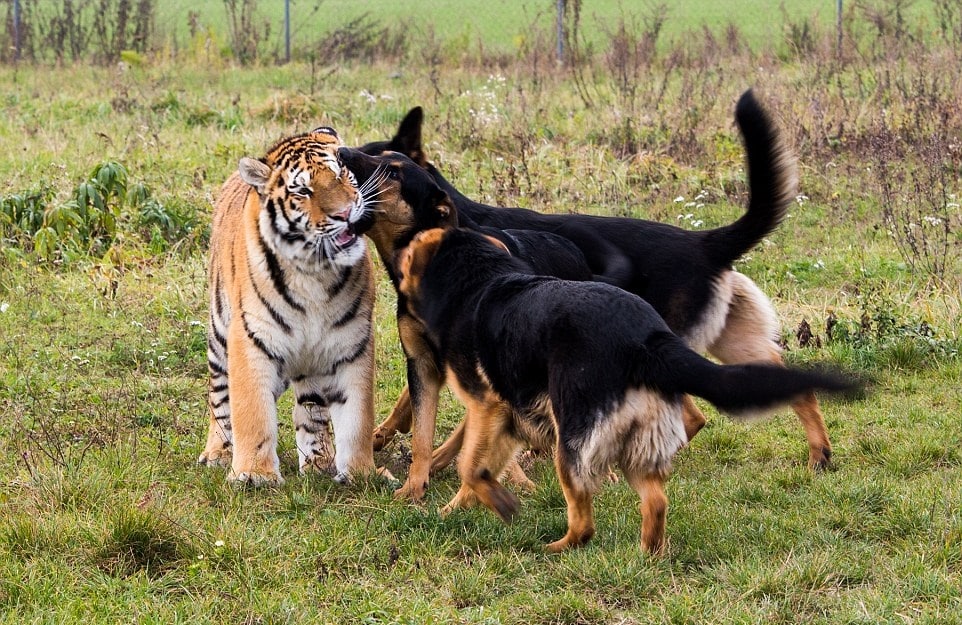 Even though Suria and Jenny are two completely different animals, the two behave just like siblings and no one can deny that! 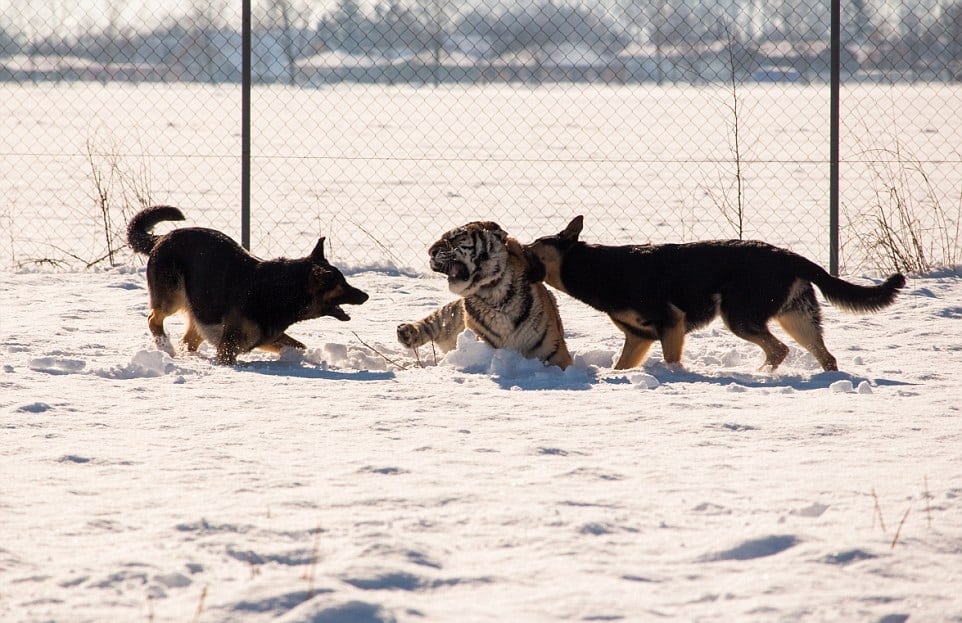 Would you ever have the courage to get in a snow fight with a Siberian tiger? Well, it looks like Jenny and her other dog friend are prepared to do something more than just to throw a couple of snowballs. 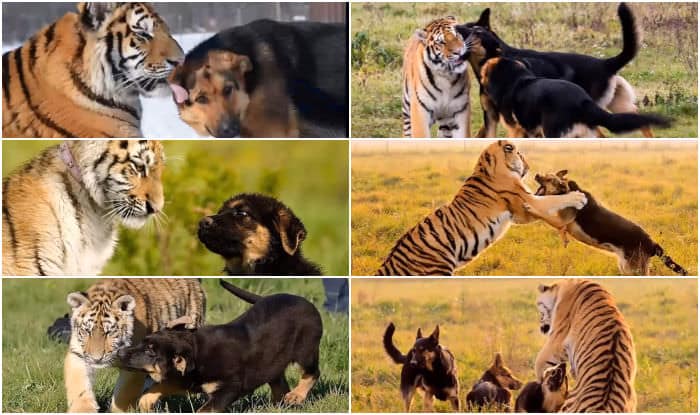 Did you ever expect a tiger to become best friends with a dog? As unexpected as this friendship might be, seeing them together is a sight to behold.

Let’s hope that Suria’s little cub is going to grow up the same and love to play with dogs just like her mother. Nonetheless, what did you think of this amazing story?