How to Use Avenir Next Font in Design & Illustration

Choosing typefaces for your projects is the most crucial part that should never be taken for granted.

With the right font, you can make your work stand out and the wrong font can entirely change the meaning of what you are trying to convey. As a designer, you should be familiar with the sensitivity of these typefaces. With so many options available today, it has become easy to get our hands on the required font. 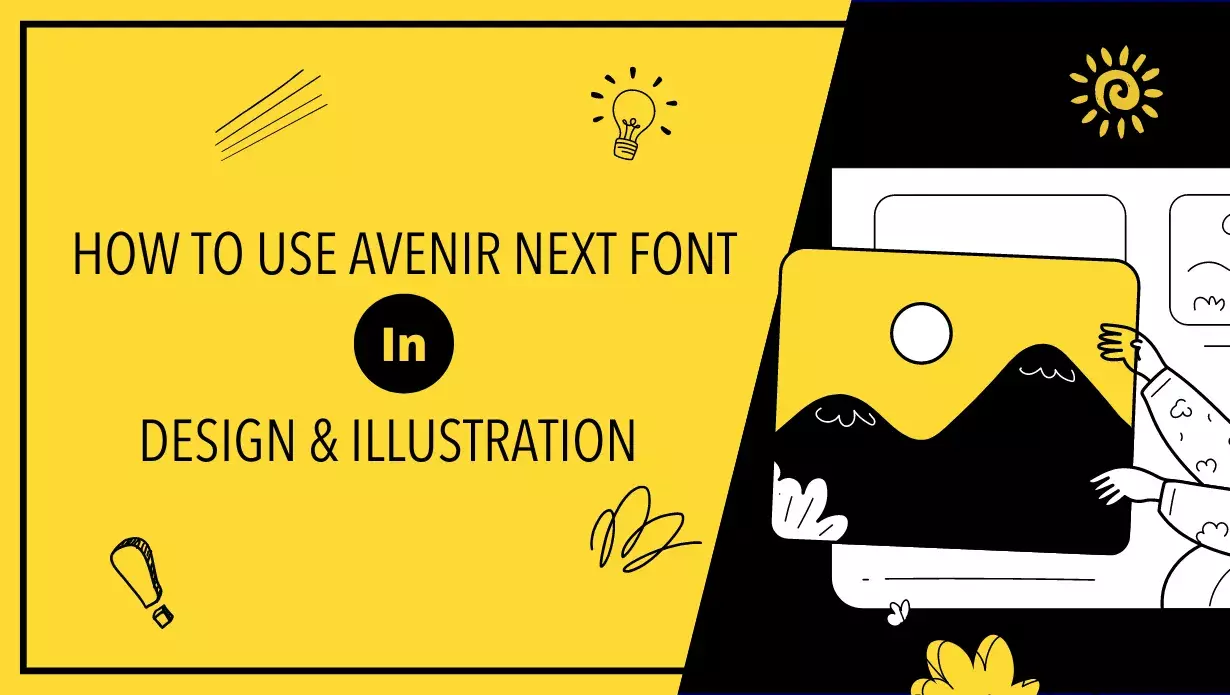 However, in this guide, we will discuss one of the most commonly used and most acknowledged typefaces i.e avenir next font that has been used for design and illustration from the past few years and has its own name in the design industry.

What is Avenir Font?

Avenir is the sans-serif typeface that came into existence in 1988 by Adrian Frutiger. When this font was released, it had only 3 weights but with time the designer made different additions after seeing its amazing popularity. It started being used everywhere which made designers come up with the extended version of this typeface i.e Avenir Next.

The Avenir typeface has different humanist attributes that give a unique touch to the design and gives you a welcoming feel. Many big names have used this typeface in their designs which gave the typeface more acknowledgment. In corporate brandings, it is one of the widely considered fonts because of their strong identity.

What is Avenir Next Font?

As already described above, Avenir Next is the extended version of Avenir font that came into being in 2004 for the first time. After seeing the massive success of Avenir, the designer thought to rework on this typeface and he successfully generated this typeface that is still commonly used in numerous noted projects. The most common difference between Avenir and Avenir Next is the letter spacing. Avenir Next gives you a more contemporary feel.

From 2004 to 2007, the designer worked on this font in order to increase its weight and attributes of this font. So far this font has 52 styles and it comprises 10 weights. It includes different character sets including punctuation marks, symbols, numbers, texture ligatures, etc. This modern font can be applied in numerous places that we will discuss below.

Usage of Avenir Next Font

Now you are familiar with this typeface so you should brace yourself with the platforms or places where you can freely use it. It is a clean typeface that you can use for your big projects without thinking twice. Whether you are about to do a big promotional event for which you need a perfect font to be used on posters or you are about to do some sort of branding and want a clean typeface that makes the branding name prominent, you can go with Avenir Next.

It is important to use the correct font at the right time that portrays the message in the perfect way because each font depicts a certain mood and vibe and if you fail to convey that specific thought, you will lose a lot of time. Though people avoid using a sans-serif font for publishing work, you can give it a try because it has all the characteristics to be used in that field as well.

A famous South Korean Multinational company, LG uses this font which has increased its worth to a great extent. There is a long list of such popular brands and companies that have added this typeface to their design.

Another common field where people do not forget to consider this font is invitation cards that can be for any business party or wedding invite. If you have just made a website and you are confused about the font selection, why not pair Avenir Next with a font similar to it? It is indeed one of the finest typefaces that give you the opportunity to be used in numerous places.

Why Use Avenir Next Font

It is the most common question that people usually think about whenever they are about to use a specific font in their design. In today’s age we have many choices when it comes to font selection but finding the correct font for a particular design is all that matters. You can not go along with any font for any design as each typeface is bound to be used for a particular purpose.

Coming back to our main concern about why we should choose Avenir Next, here are a few points that depict the importance of this font.

To give the best experience to your visitor should be the main motive for every designer that can only be achieved by using the right kind of font in the design. Avenir is the most versatile typeface that you can coordinate with different typefaces without thinking a lot. It gives you the best user experience by enhancing the quality of work and this is what every designer should be focused on.

Versatility is the main factor and this font is already winning at it so why shouldn’t you go for it?

Each font has a different size due to the different width of each letter and the space between 2 characters. When it comes to a successful site, the size of the letters matters a lot. The smaller the size, the more difficult it will be for the readers to understand. Fortunately, each letter or character of Avenir’s next font differs in size so you get numerous options to select from.

Even you will never have to think a lot about whether the size of the font will be compatible with mobile screens or not. Just go with the flow and choose the perfect size for headings and body text.

There are only a few fonts that support all the currency symbols for which the designer sometimes faces difficulty. The best thing about Avenir Next is that it supports all the symbols be it dollars, pounds, or other currencies. Avenir might lack this characteristic but you will find this feature in Avenir Next that gives you another reason for choosing this font.

Another major reason for considering this font is its performance and speed. You can find numerous fonts for your newly designed website but you can hardly find a font that is as light as Avenir Next. Due to this feature, you will experience the fast speed of the website. The size of this font is 98KB so do not worry about how much space this typeface will occupy.

Moreover, it has different weights and it helps to give a unique and eye-catchy look to the design. The performance of the website is all that should matter to you because it makes your site a success or a failure.

Here is another feature that enhances the importance of Avenir Next font. The website should be designed in a way that it never fails to attract the visitor and in making the website worth appreciating, fonts play a major role. Amazingly, this font has an enduring appeal so people can’t resist appreciating your site. It also ranked at number 12 in the best font family. That’s why people are going crazy for this font for all the good reasons.

From big brands to notable companies spread all over the world, this font has become the number 1 choice.

5- It Makes the Text understandable

How many times has the website turned you off due to unreadable text? This is what happens when you do not pay any attention to this feature. Avenir Next is a clear and neat typeface that makes the text understandable so that people can easily understand what you are trying to convey. The next time you are about to design a site, do not take this feature for granted because the clearer the text, the more users you will get.

Avenir Next has earned huge acclaim and acknowledgment in the last decade due to all the features we have discussed in this article. Inevitably, Avenir is the most commonly used font but you can not deny the importance of Avenir Next as well. That is just the extended version of Avenir. From big designers to big companies, no one hesitates to consider this font.

I have tried to cover each possible aspect in this article to let you know why the perfect font selection is important and why you should consider this font for your next project. I hope this article will fully assist you.