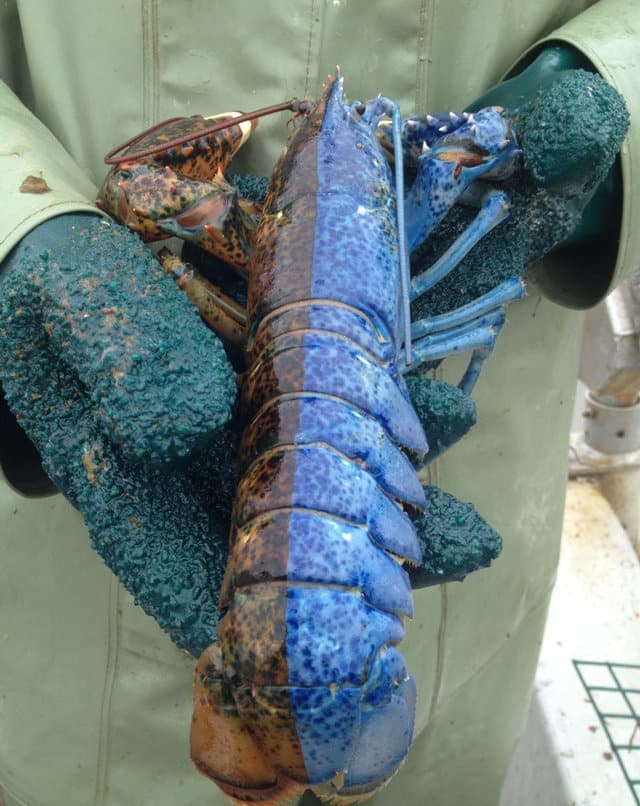 Nature can be amazing, especially in its design. However, sometimes, nature can get a little mixed up and create some truly bizarre looking creatures, like this lobster. However, one Swedish man caught another one of these creatures on tape and it’s like nothing you’ve ever seen before. 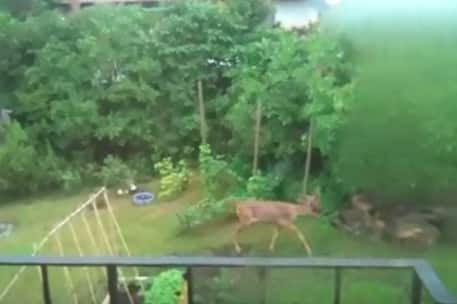 Filming what he thought was just a regular deer, the Swedish man zoomed in closer and closer. He was excited to see the creature in his backyard but had no idea just how special it was. It was the early morning hours so he wasn’t focused enough to notice the abnormality, but when he looked at the footage later that day, he noticed something odd. 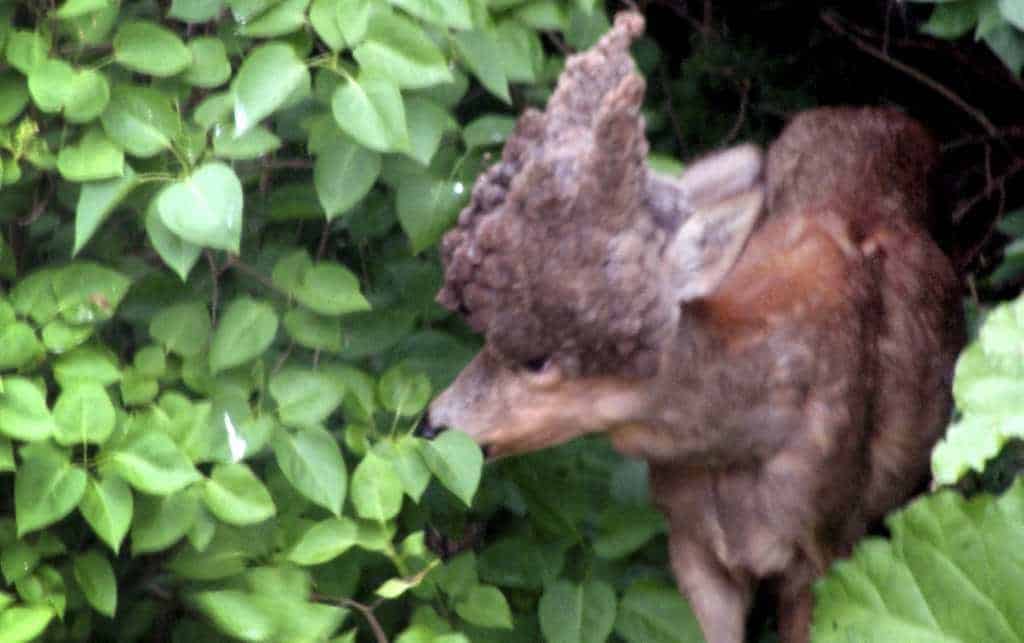 There were multiple deer in the shot, but he noticed one of them had a strange growth on his head and antlers. It wasn’t every day that he got to see a wild animal with a genetic abnormality literally sprawled across its face, so it was rather intriguing. He didn’t know what it was, as he had never seen anything like it before. 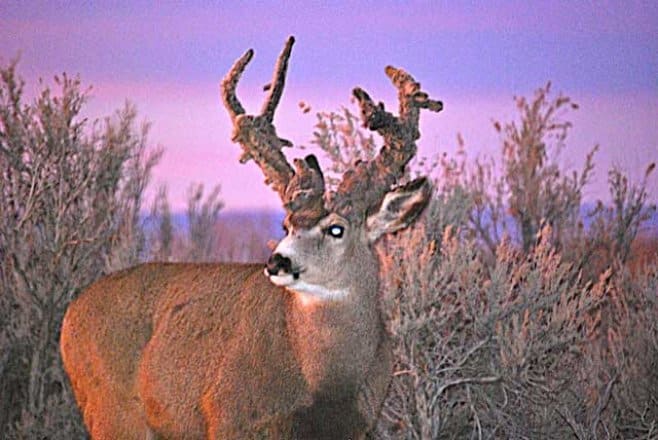 It turns out, the deer he filmed suffered from a rare syndrome called Cactus Buck Syndrome. The syndrome occurs when bucks have abnormally low levels of testosterone, and it causes abnormal shaped growths to appear on their faces and antlers. 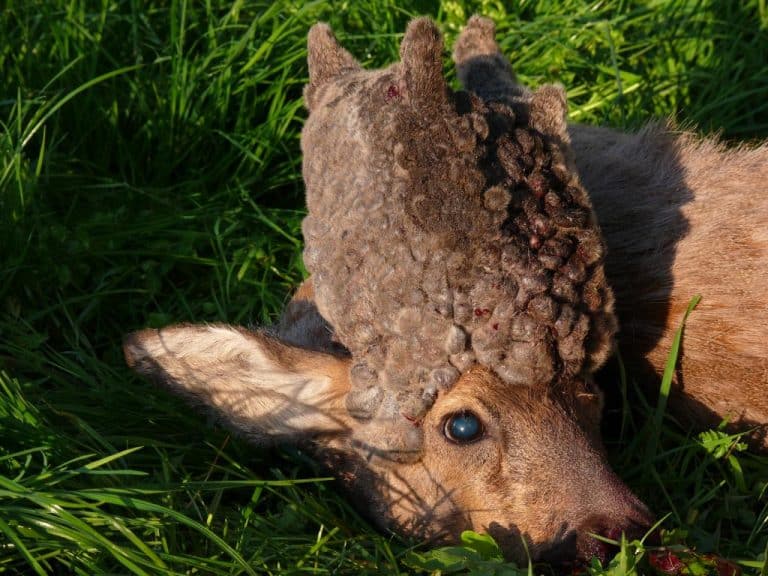 The growths maintain their velvet texture which usually sheds on other males. Another reason this happens in male deer is if their testicles never descend, causing a hormone imbalance. Sometimes, it can take over before the buck develops any other male characteristics. 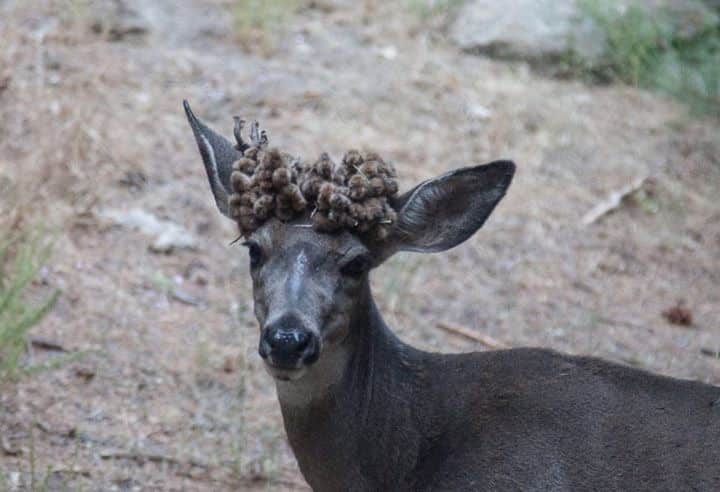 These bucks are sometimes known as antlered does because they never develop the characteristics of developed males. In some cases, the antlers don’t even develop. 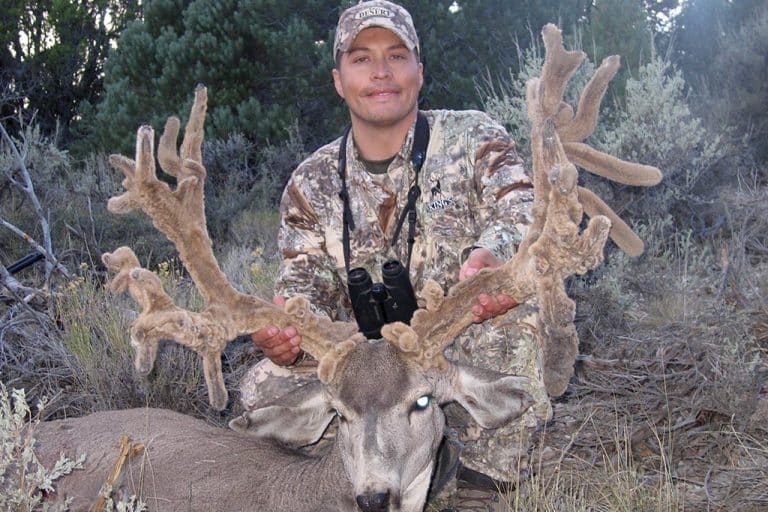 This buck although special was hunted legally during hunting season. The hunter posing looks to be proud, although unaware of the rareness of the condition. This buck had a unique reason to why he had the condition. 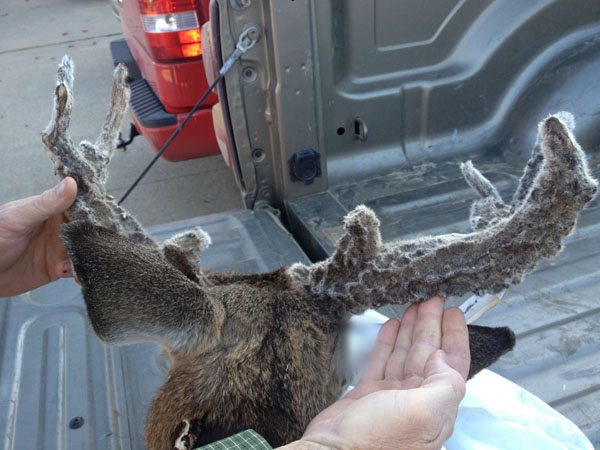 This buck’s testicles were removed and when the hunter noticed, the condition made more sense. It looked as if the deer had accidentally castrated himself either jumping over a fence or by some other fluke. It must have been one painful incident. 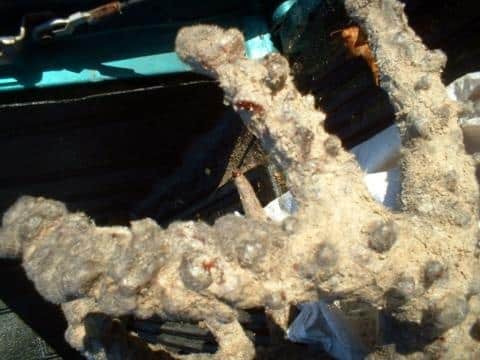 The trauma explained why this buck had fully grown antlers with the growths. A Buck in this condition can only get this way due to castration later in life. This, unfortunately, was one unlucky buck. 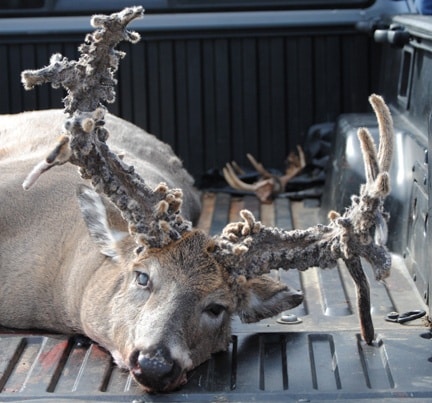 Sightings of these deer are rather rare, which is why when one is hunted or captured on film, it’s eagerly shared. This condition doesn’t just stop at a certain age either, it continues to grow until the deer dies. Sometimes, it gets so big it is a miracle the deer can hold their head up straight. 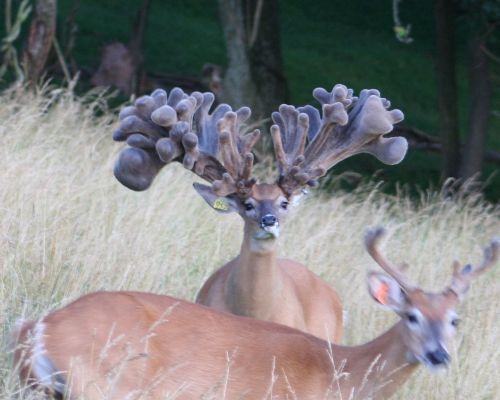 This buck is a farm-raised deer which is why it has lived long enough to grow antlers this large. At a certain point, the owners will have to intervene or the buck won’t be able to hold his head up! But nothing really compares to the crown-like figure on top of the buck that the Swedish man filmed. 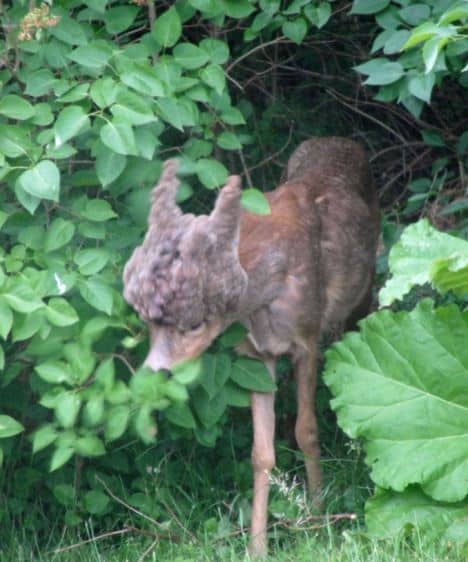 Here is a better look at the special buck who appeared in the man’s backyard. It looks like some sort of crown or helmet on top of his head, yet is mostly fuzzy. Every buck with this condition has a unique shape to their antlers and head depending on how and when the condition developed. 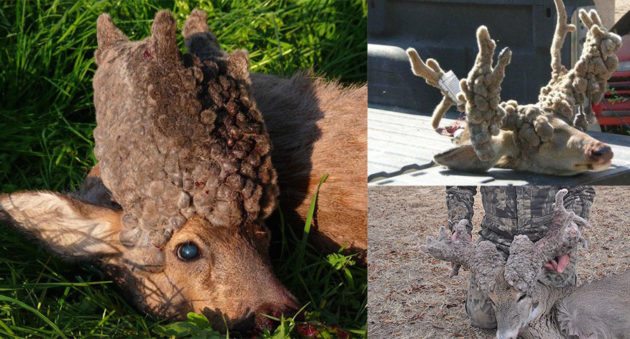 It almost feels as if these rare creatures should be protected but, in actuality, many gladly use their heads as trophies. Some even search for them on purpose, trying to break the world record. 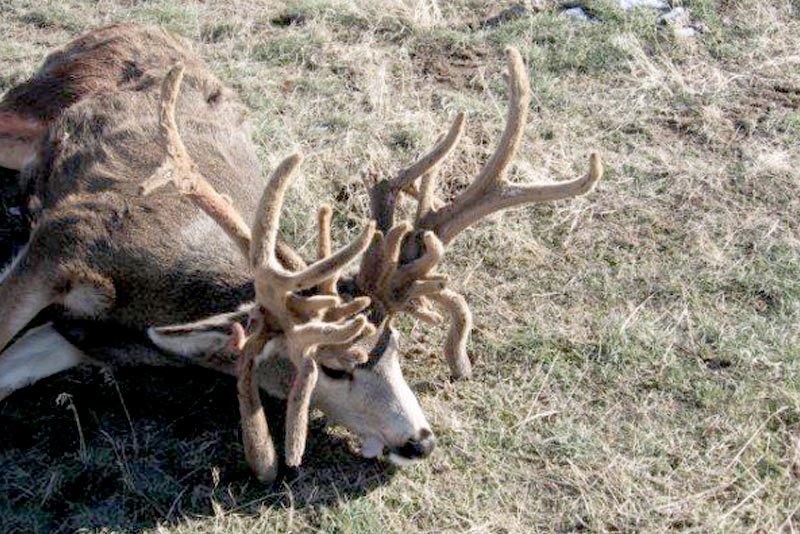 The world record for cactus growths on a buck is 47. The prize for that buck is insane! The antlers are estimated to be worth $100,000. 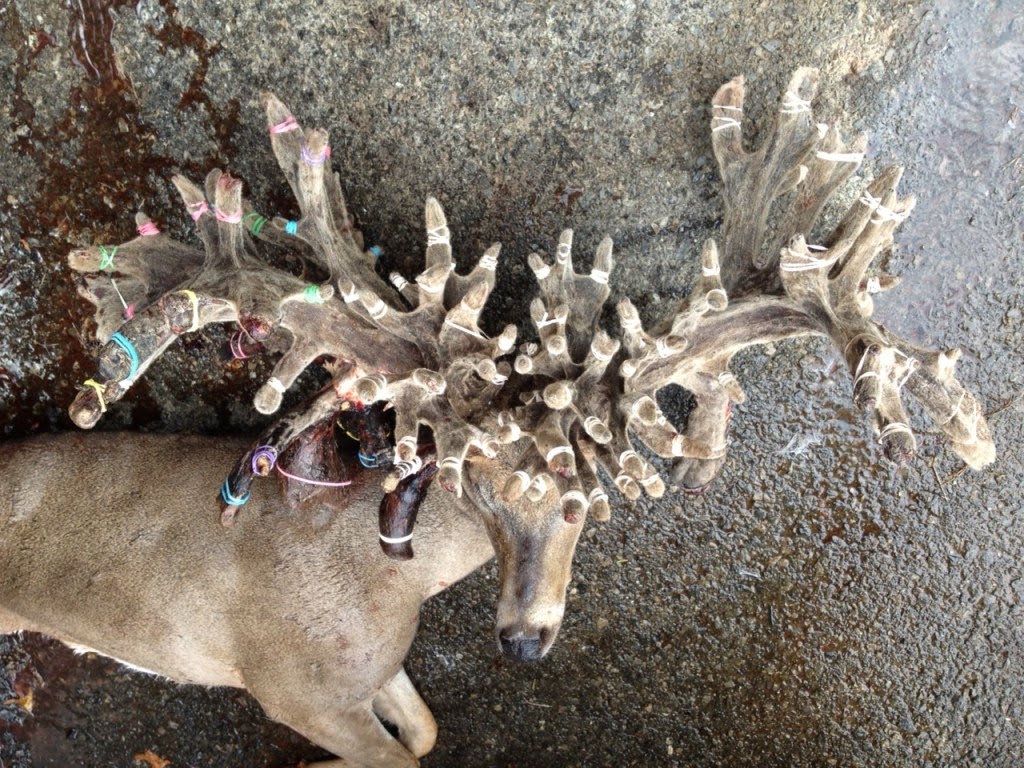 Due to the abnormally shaped growths, the deer can injure them often, which is why you see pictures of them with blood on their antlers. It would really be a sight to see one of these bucks alive and in their natural habitat.