Great white sharks are among the most feared predators in the sea. Despite the dangers associated with these fierce creatures, most human beings do not want the creatures to meet with any harm. A group of beachgoers in Cape Cod got an up close and personal look at a shark named Jamison and helped guide him back to safety. 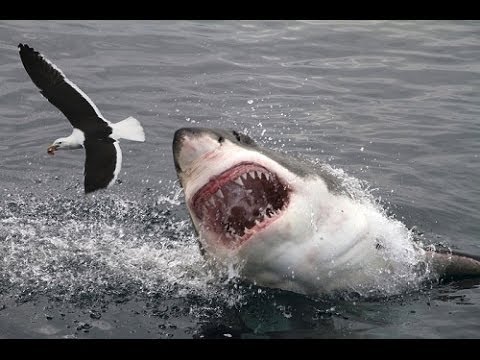 This great white shark got himself in major trouble when he got beached on Cape Cod, Massachusetts. What was the shark doing so close to shore anyway? Why, he was trying to catch some seagulls for a little bit of lunch! 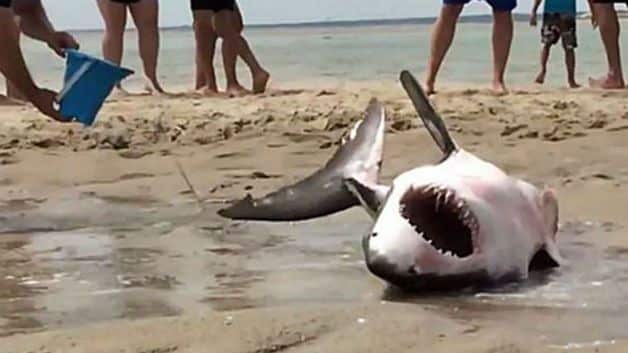 People were shocked to see the whale so helpless. Many people who live around the ocean know that for a shark to survive being beached, it desperately needs water. On this day, beachgoers immediately set up a help line with buckets of water to keep him wet and cool in the heat. Meanwhile, they called the local harbor master. 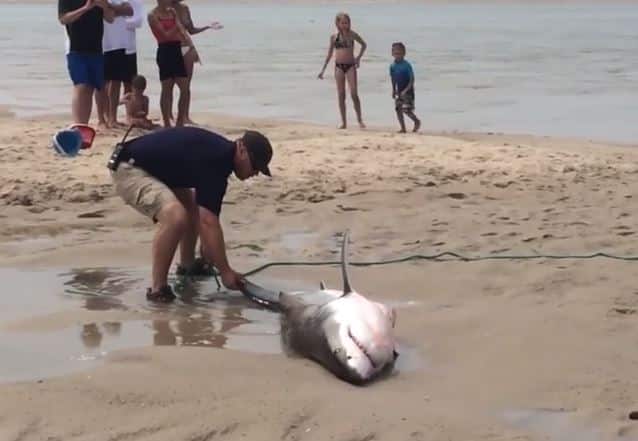 Harbour master Stuart Smith arrived fairly quickly, but it didn’t look good. He told the Associated Press that although there were about 40 people trying to splash water on the great white, it seemed like it was dead. Conservation experts swarmed the area. 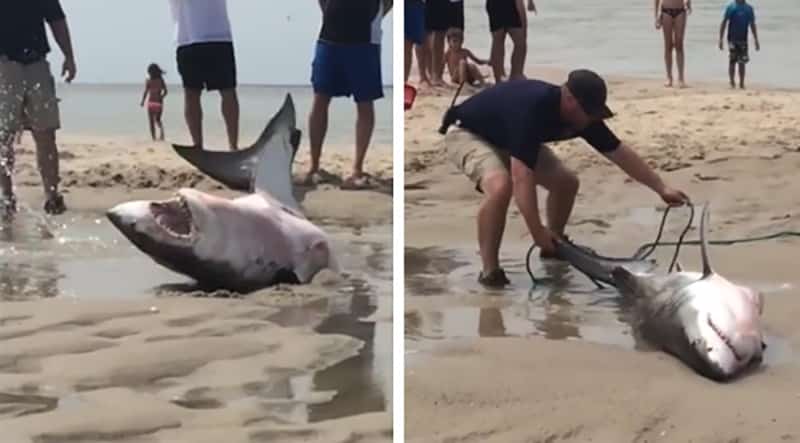 It had been an hour and a half of dry land for this great white. They dragged the young shark back into the water using a boat. This process seems like it could hurt the shark, but it is the safest way to move such a large beast. Rescuers also used the time to check for injuries.

Thankfully the great white was free of visible injuries. He was just dehydrated. Surprisingly, he perked up almost immediately once it reached the ocean again. It was tagged with a GPS device so they could track its progress and health. 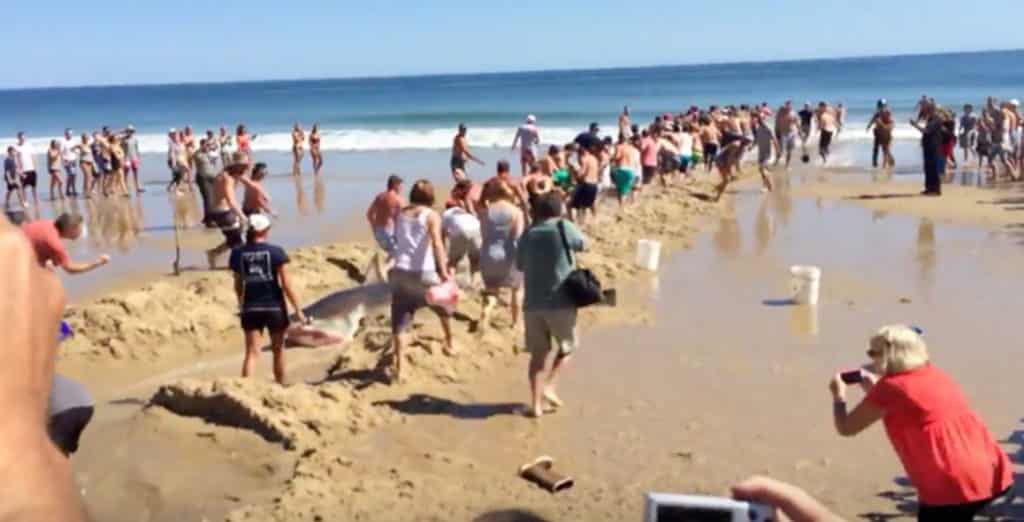 The shark being revived moved everyone to cheers of joy. The shark swam into deep waters quickly. It seemed to be quite healthy after such an ordeal. The photos show him happily swimming away, grateful for the efforts of the crowd. 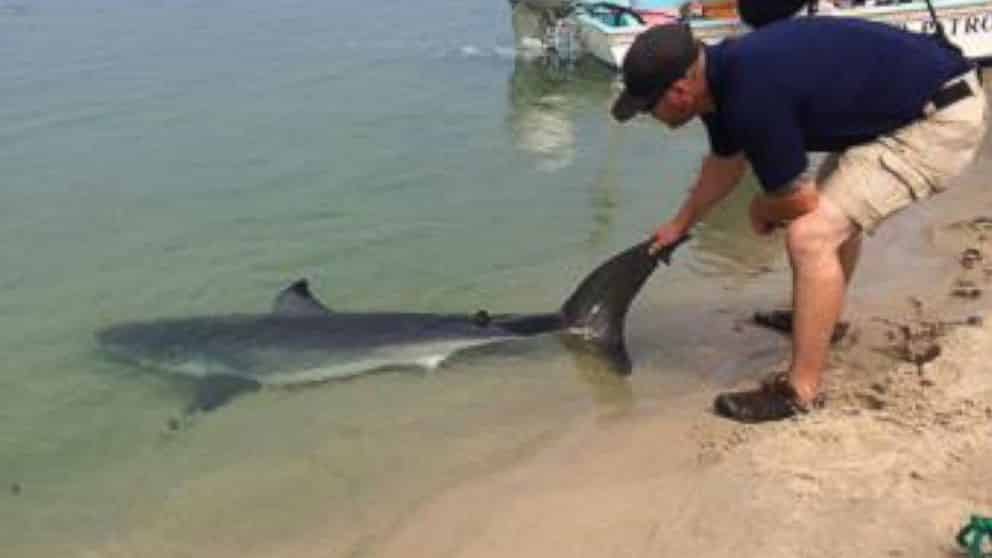 Whales are much more likely to become beached than sharks. But sharks can be led astray for many different reasons. They can get disoriented, or lose track of space pursuing prey, as this young shark did. Although some sharks have attacked humans, the risk of an attack is greatly overstated.

Video of the rescue was uploaded by one of the beachgoers, Mike Bartel. “Thanks to the harbormaster and beach-goers, this shark was saved.” But this was far from the end of the story. Fast-forward one year. 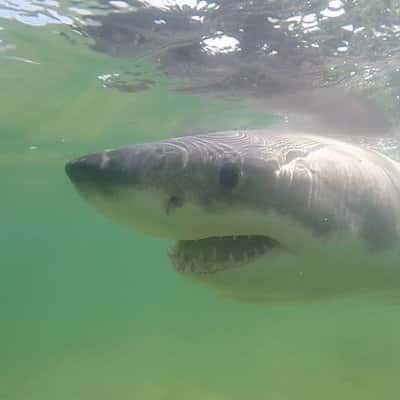 The shark is now known as Jamison and he has a fondness for the place where he was rescued. Now the 7-feet shark really knows his way around. In 2016, after almost one exact year, he showed up again. 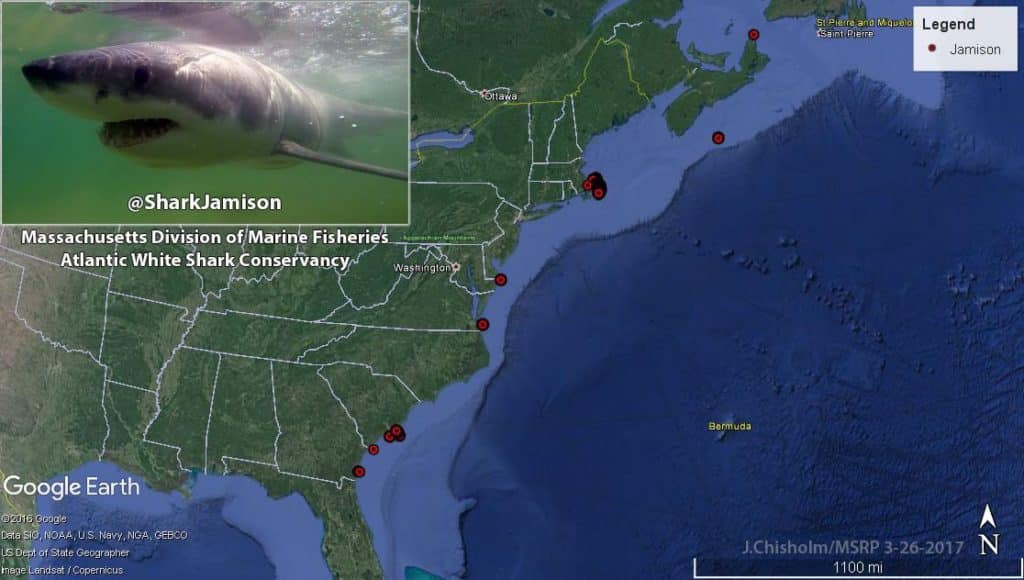 The Atlantic White Shark Conservancy has tracked his progress via a GPS. they announced on Twitter that he came back on June 29, 2016. He was first spotted near Monomoy National Wildlife Refuge. He seems very comfortable along the MA coastline. 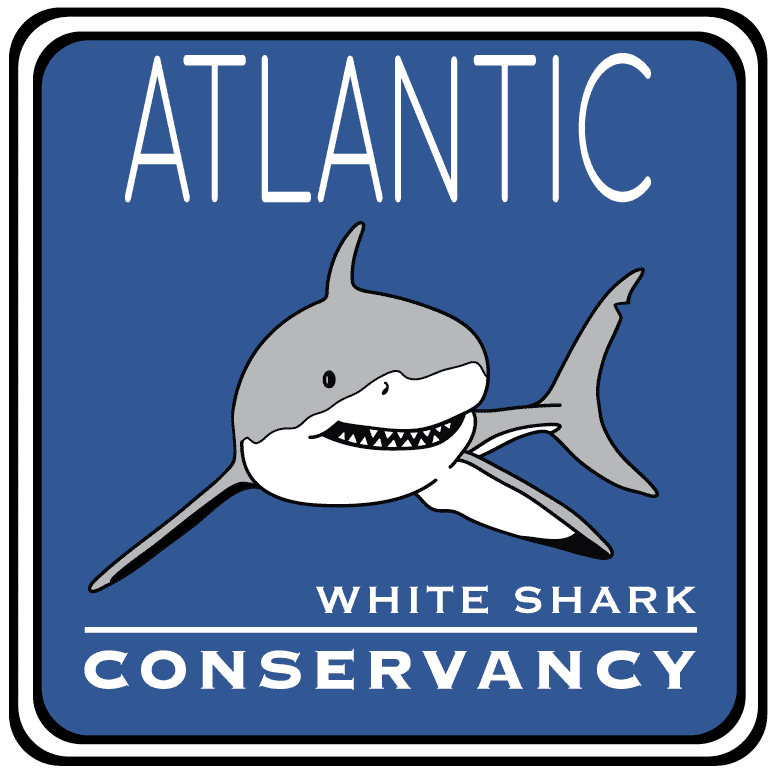 The Atlantic White Shark Conservancy is a shark research group that works with the Massachusetts Division of Marine Fisheries. The Conservancy educates the public about great white sharks and promotes programs on conservation. They study shark activity in Massachusetts. 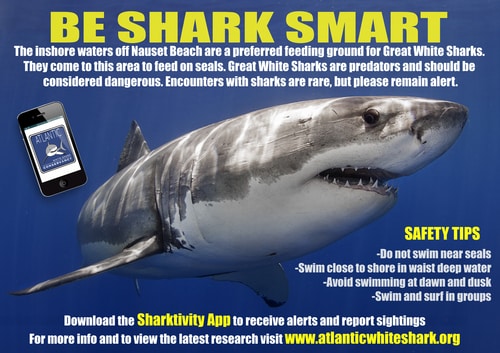 According to the Conservancy, Cape Cod has become an aggregation site for great white sharks, presenting a rare and incredible research opportunity. Their rescue efforts of Jamison are a great example of research and education in action. By tracking the great whites as they travel long distances, the group hopes to learn more about the species. But what about Jamison? 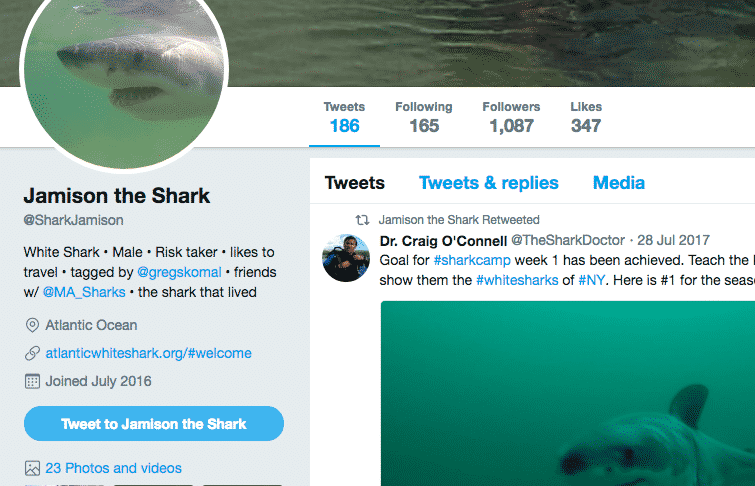 What Jamison has been up to since the rescue might surprise you. He now has his own Twitter account, @SharkJamison. He describes himself as: “White Shark • Male • Risk taker • likes to travel • tagged by @gregskomal • friends w/ @MA_Sharks • the shark that lived” in a nod to Harry Potter.

Meanwhile, others continue to be inspired by the great white and his adventures. Writer Consie Berghausen and her daughter Nina have documented his adventures in a new children’s book.  According to the back cover text: “A Shark! Named Jamison is a true story about the adventure and rescue of a juvenile great white shark on the coast of Cape Cod during the summer of 2015. A surprise landing for Jamison caused a surprise for the beach goers and unexpected rescue opportunity.” 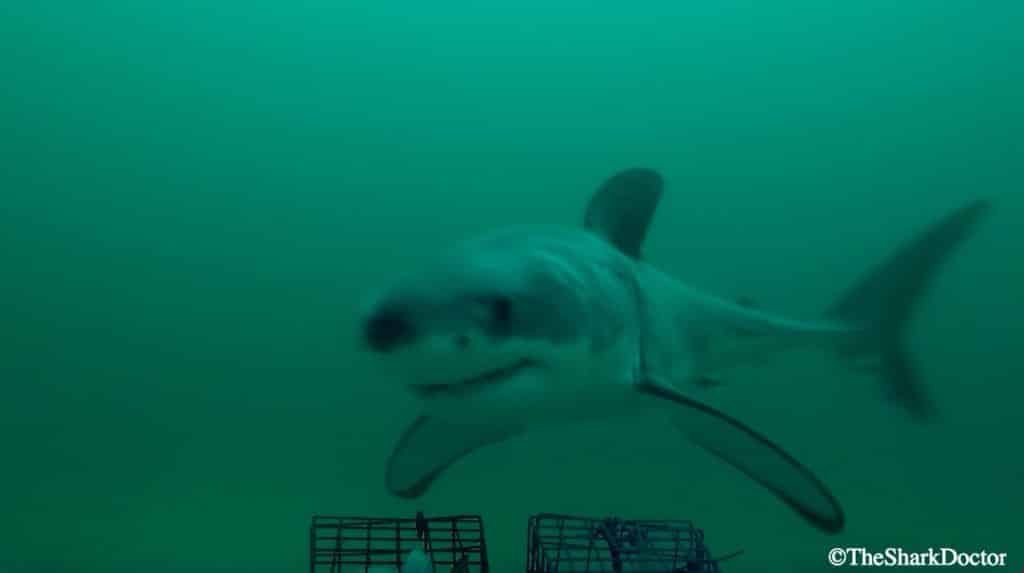 As for Jamison himself, the conservancy plans to continue to update the public on Jamison’s travels. So far he has been detected as far away as South Carolina. As for his rescuers, they hope to enjoy stories about the great beast for years to come.