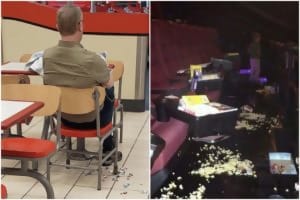 Everyone can be a little selfish every once in a while, that’s life. However, most people do stop and think about how their actions are affecting other people. It’s important to remember that there are other people living in this world, and your selfish actions can affect other people. This line-up of rude people, took being selfish to a whole new level.

While this lady was looking for the perfect loaf of bread, she decided to cushion her knees with not only one loaf of bread, but two. She didn’t want to strain her knees while she bent over, so this lady flattened a perfectly good loaf of bread for her own sake. Talk about wasting food. If her knees were bothering her that much, she should have asked someone for help. Instead, she is wasting two loafs of bread, because now that they are smooshed, the store can’t sell them axnymore. 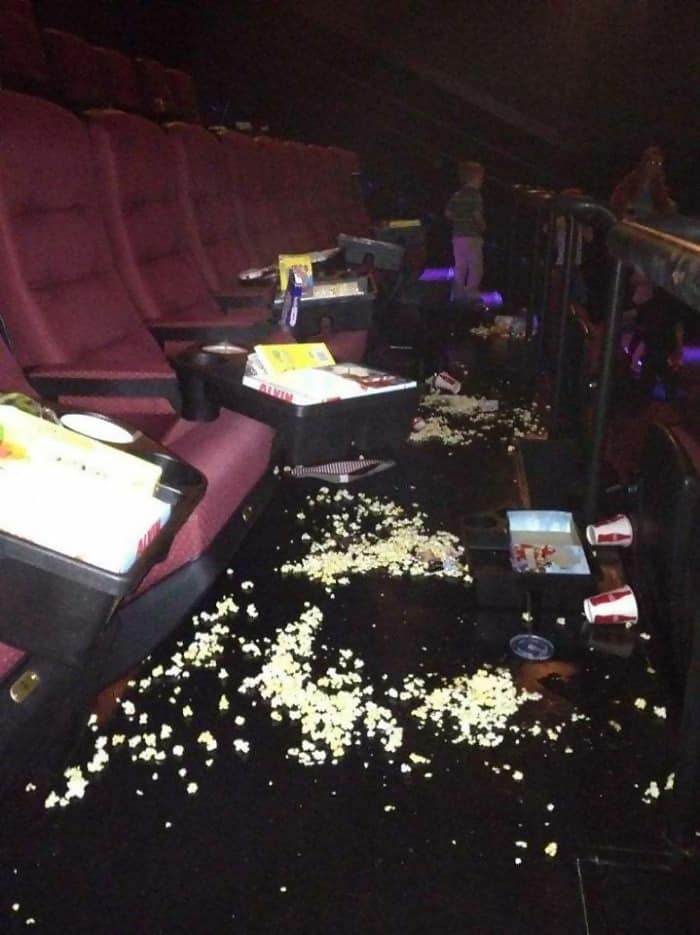 When people go to the theater to see a movie, it seems like their manners just fly out the window. In this case, they completely trashed the theater. They left popcorn, candy, and sticky soda everywhere, for someone else to clean it up. This could have been an accident; however, it doesn’t look like an accident. It looks like these people were extremely careless with their food. If you don’t want someone to throw food all over your house for you to clean it up, don’t do it out in public for someone else to clean it up. 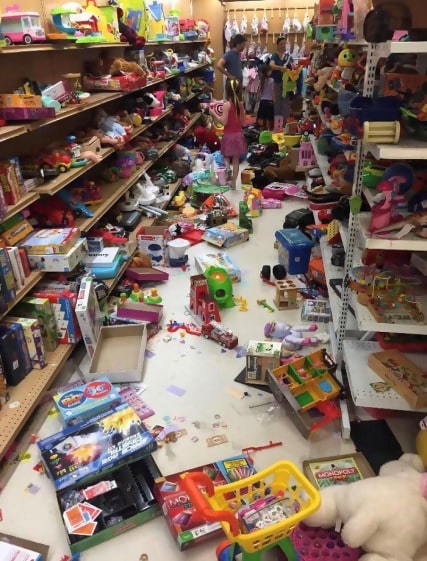 As the saying goes, “kids will be kids.” However, it doesn’t look like the parents watched their kids very closely. The parents should have either had their kids pick up the mess, or they should have cleaned it up themselves. Instead, the employee at the toy store had to clean up that horrendous mess.

Airplane Floor is not a Trashcan 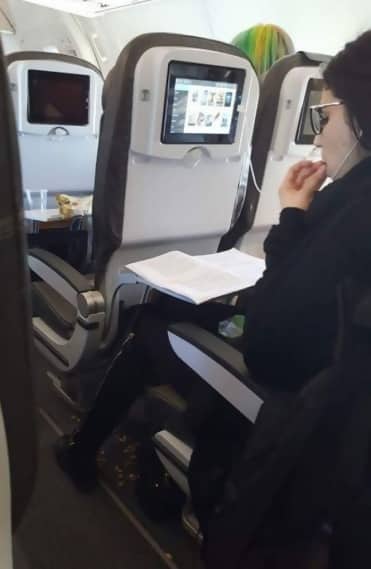 This lady was enjoying her pistachio nuts a little too much. Planes are stuffy and cramped. You have no room and you just want to get to your destination. This girl obviously didn’t care about leaving a mess on the floor. The last thing you want is to have your feet in a pile of pistachio nut shells for a four hour plane ride. Anyone would be embarrassed about leaving this huge mess, but this lady. 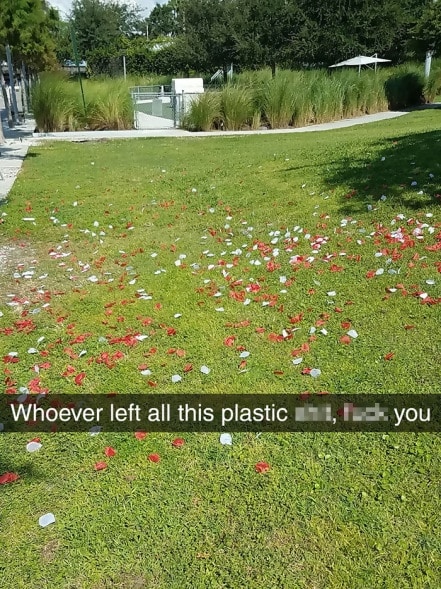 Change the Diaper in the Bathroom… 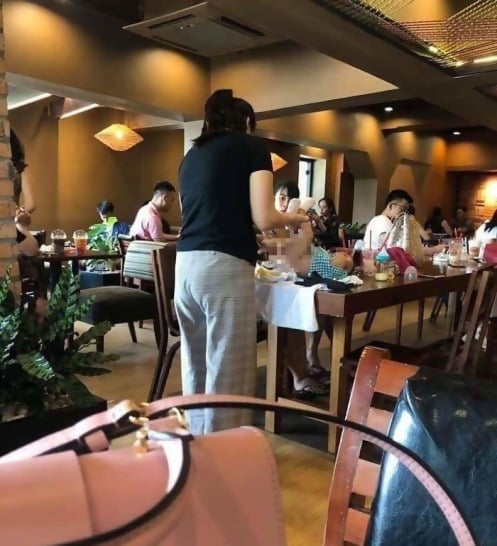 Normally, when a baby starts crying, you check their diaper first. If they smell, then you go to the bathroom and change their diaper. This lady decided to change the baby’s diaper right on the table, right in front of people. Bathrooms are there for a reason. Changing a baby’s diaper on a table, where people eat- is very rude. 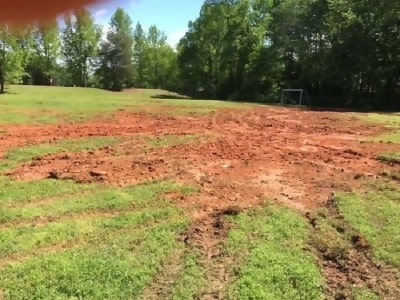 People pay a lot of money to keep a soccer field in good shape. The parents of this particular soccer team were not happy when they walked over to the field, only to find it like this. It looks like someone decided to take their truck and drive it in circles on the field. The people with the truck probably had fun, but they probably ruined the fun for a bunch of kids throughout the season while people try and work on the field.

This is just Gross… And Rude… 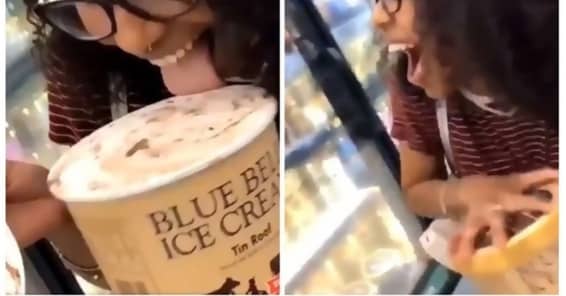 Obviously, this girl finds this to be hilarious. But licking tubs of ice cream and returning it back to the freezer is just rude. Someone will unknowingly eat that. This is just childish. This is incredibly unhygienic, and unfair to the person who bought this ice cream. This is just wrong… 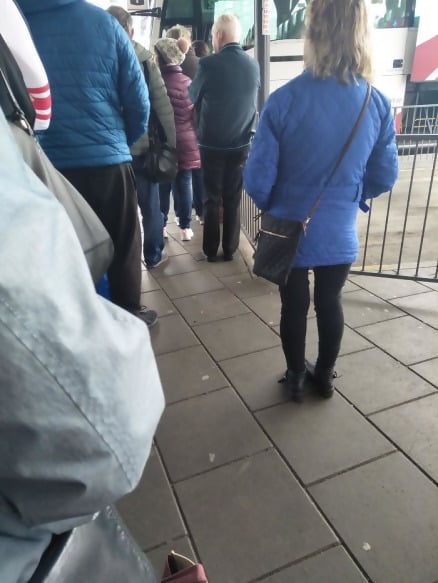 It looks like this lady is slowly trying to cut people in line. No one wants to wait in a long line, but it’s inevitable. Cutting people in line, who were there before you is just rude. Obviously, she doesn’t care. She just only cares about herself; otherwise, she would have waited in line with the rest of them.

Not Strange at all… 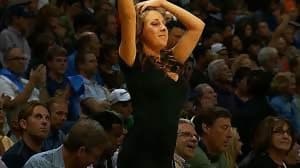 It looks like this lady has no problem with sitting in a room full of people while she sits with a fan cooling her legs. By doing this, she is making sure that the rest of the warm room doesn’t have an opportunity to cool off. 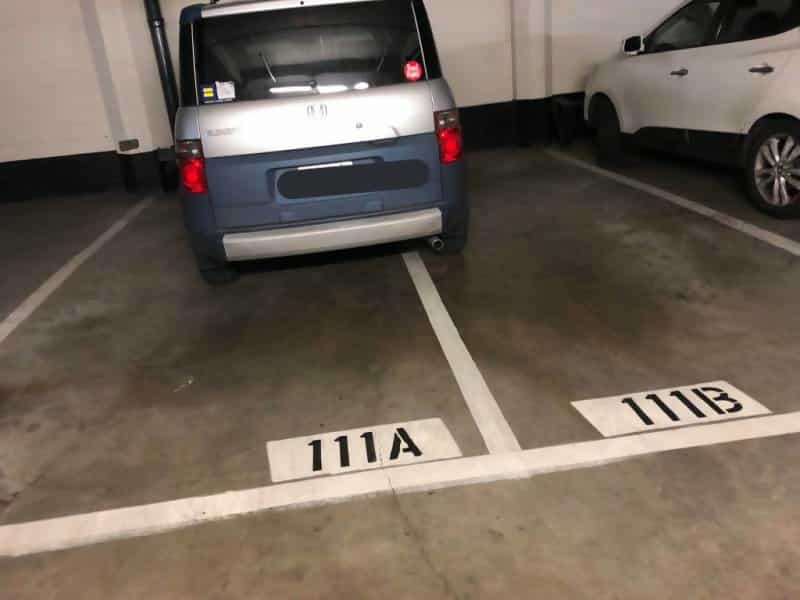 Taking up two spaces is extremely rude. When the parking garage is almost full, it can be hard to find a spot to park. It makes matters worse when someone double parks. The driver clearly didn’t care about fixing the spot. We know that they realized that they parked over the line, because that kind of thing is hard to miss. 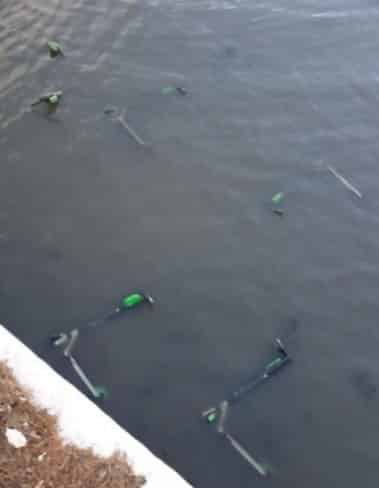 Apparently, someone had an issue with the community electric scooters. We don’t know why, but they felt like they needed to throw the scooters in the lake. The person that did this obviously wasn’t thinking about others. Just because they didn’t need a scooter, didn’t mean that other people didn’t want to use them. Not to mention, that the scooters cost money and someone paid for them. 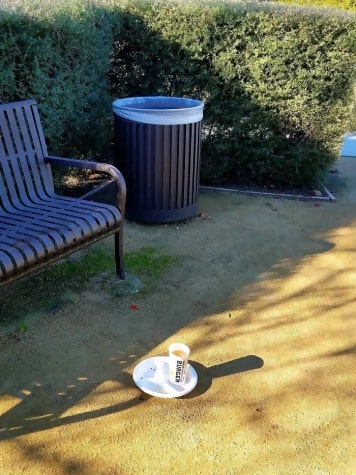 Littering is bad enough, regardless if there’s a trashcan nearby or not. However, it’s even worse that someone decided to leave trash literally feet away from a trash can. Knowing how littering affects the planet should make you want to prevent littering. But the person who did this couldn’t care less.

Trash on a Plane 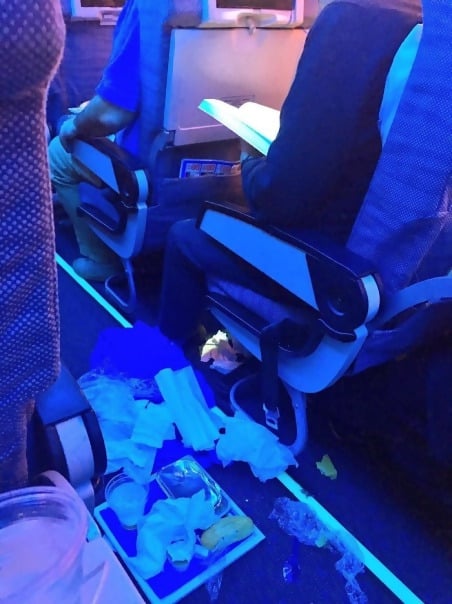 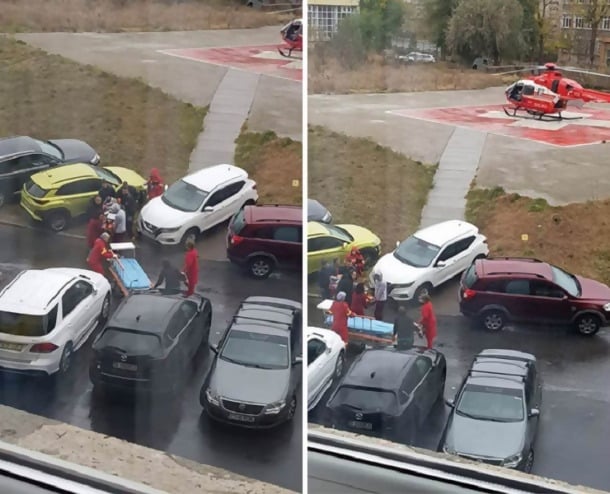 Most people have been in a situation, where you’re visiting someone in the hospital and there are no parking spots left- so you improvise. But, is it necessary to park directly in front of an air ambulance spot? More than likely, these people are in a hurry, and the person they are transporting is in dire need of medical attention. Be a little more considerate about where you park.

Taking up Two Seats for your Feet 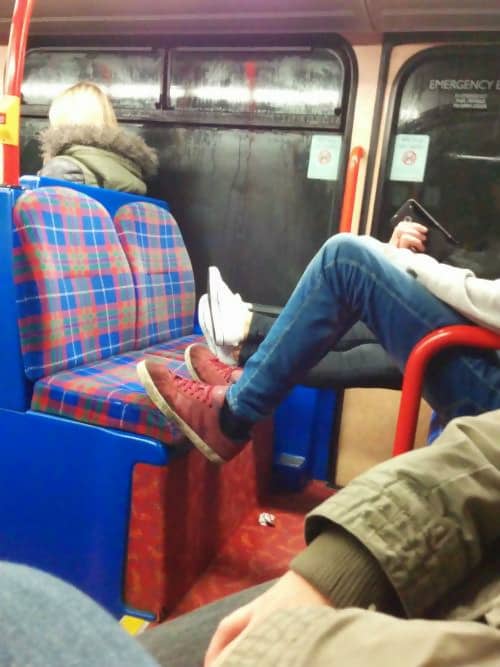 It’s infuriating when you get on the bus and there are only two seats left; however, the only seats left are being occupied by teenagers who are resting there feet on it and they won’t move. You then awkwardly stand waiting for someone to get off on their stop. It’s extremely rude to put your feet up on open seats. Let someone have the opportunity to sit down. 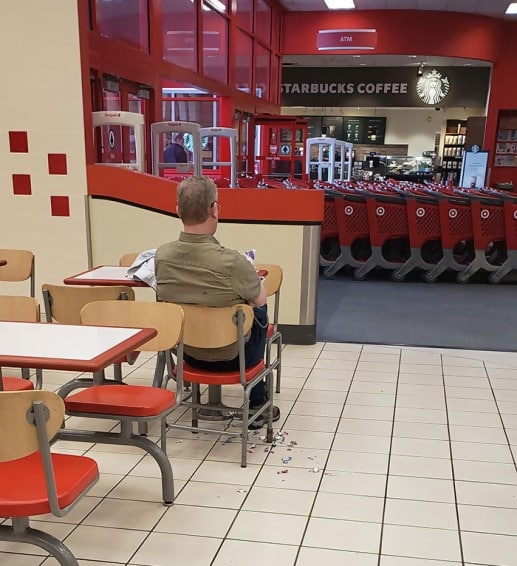 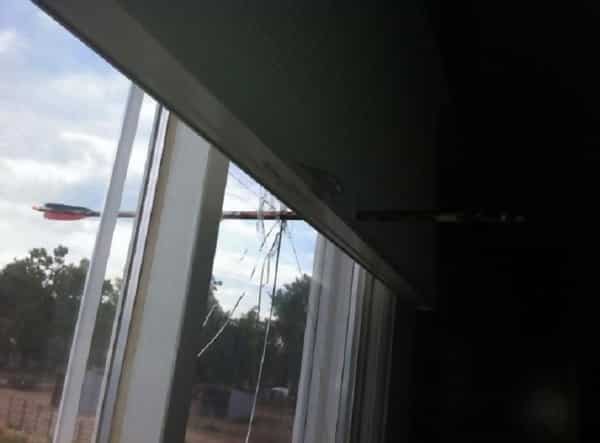 We hope that this was an accident. Shooting an arrow at someone is extremely dangerous. Thankfully, they only hit the window. It could’ve been a lot worse. If this was an accident, then they need some lessons. Because hitting someone’s house is unacceptable. 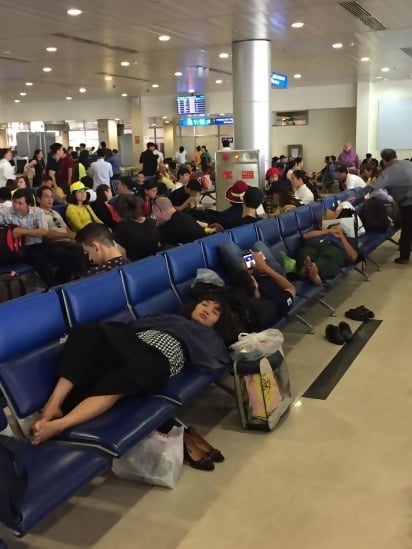 This airport looks extremely busy, and taking up seats isn’t nice. There are some people who physically can’t stand up for long periods of time, and they need to sit down. By taking more seats than needed, you are taking seats from people who actually need them. There are only three people lying down, but they are taking up about 12 seats. That means that 12 people could sit there, but since these people are being rude, they have to stand. They should sit up, like everyone else- and let other people have a chance to sit down. Next time, before you do something- make sure that you are being considerate to others.